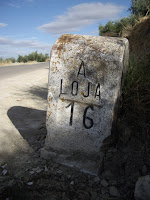 Divided in two by the Rio Genil, Loja sits comfortably beneath the barren limestone peaks of the Sierra de Loja. One of the last towns to be captured by the Christians, during the late 15th-century, its Islamic heritage can still be seen in the remains of the walls and tower of its former Alcazaba (citadel).

Between Loja and Granada, 50 kilometres to the west, lies the fertile plain, Vega de Granada. Once a pivotable frontier between the Moorish dominion of Granada and the Christian territory, it is peppered with many small villages whose crumbling hilltop fortifications are a reminder of former days serving as defensive outposts for the kingdom. Cycling alone, through undulating hillsides clothed in olive groves and cereal fields for as far as the eye could see, I thankfully felt a long way from the tourist trail, both in body and spirit. 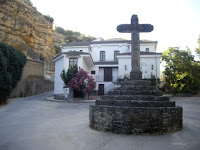 Montefrio is regarded by many as the most spectacular of all the former defensive villages throughout the veja.  While we chose the village more for its relative closeness to the two mystical climbs of Spain's south, the Sierra de la Pandera and the Pico de Veleta (in the Sierra Nevada range), it proved just as alluring in its own right. 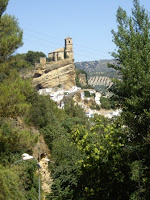 A giant hand reaching out to heaven, the Iglesia de la Villa, the taller of two churches which cradle the village from each side, was built on the site of a once-mighty Moorish castle. Constructed along with a separate watchtower during the mid-14th century, it formed an integral part of the network of lookout posts that protected the important routes throughout the plain.

Not to be outshone, even our overnight accommodation at the altitude-unfriendly Hotel La Enrea, formerly a 19th-century olive mill, required a good deal of sweat and pain before I tiredly pedalled my way to its front door.