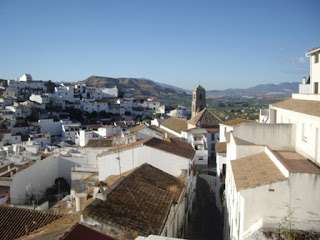 Another typical pueblo blanco, crowned by the remains of a Moorish castle, Álora sits snuggly between three rocky spurs. High above the banks of the Rio Guadalhorce, its way of life comprises a mixture of the present and the past. Distinctively Andalusian, its landscape is suited to agriculture - fruit, vegetables and the mandatory olive groves - while its economy has been fuelled by the increase in tourism.


Close to the top of the village’s tangled labrynth of one-way lanes was our brief stay at the Hostal Durán. Come morning, it was about to be one of the more difficult places to draw ourselves away from since leaving Solsona four weeks earlier. But it wasn’t just for its comfortable accommodation, mouth-watering menu and convivial proprietor.
More vesper-friendly than a thoroughfare for larger vehicles, the network of steep and narrow streets so common throughout Andalusia’s hilltop towns was fast becoming a daily challenge for Roz; and Álora was no exception. Having spent a good part of the evening before, wandering the near-empty streets in search of the easiest route out of the village, we were approached by an elderly gentleman, who in all likelihood needed some immediate help of his own. Out of breath and looking rather anxious, it wasn’t until we caught a glimpse of the plume of smoke wafting behind him that we realised that it may have been help of a more serious kind. Concerned, we accompanied him a short distance down the street.


There, sitting lifeless and still reeking of toxic smoke, sat a 1970’s Spanish SEAT. Its outdated shape and rust-infested exterior suggested that its days of travelling up 30% gradients were all but over.  While my immediate thought was to offer the best help I could, perhaps a sympathetic smile and an attempt to fetch someone who might know what they’re doing, I at least felt obliged to look under the bonnet of the car. 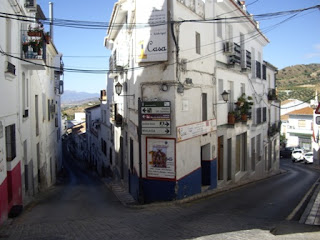 As expected, the engine was covered in oil and black soot, a dead giveaway that it was covered in oil and black soot. With my lack of expertise fast becoming as evident as the scuttled carcass I was staring at, I politely asked the gentleman to get in behind the wheel and turn the ignition key. Seething black smoke from the exhaust, it presently dawned on me that there might just be a good chance that the problem was simply a flooded carburetor. Well, just maybe, I thought.


After what seemed like a long wait we tried starting the car again, only to suffer the same result. By now the morning was on the wane and with 150 kilometres of hilly terrain ahead of me I started to break into a sweat. The thought of getting in late, probably sometime after eight, was not the recipe for a relaxing day’s ride, particularly when my first turn of the crank was still a while away. 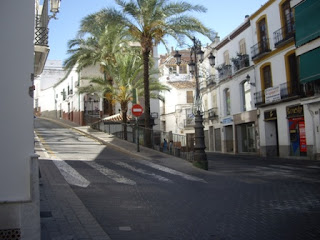 Hardly a discovery of the ages, there was but one obvious thing I could try. Despite the narrow streets and tight corners, one aspect of hilltop towns like Álora, is there’s plenty of downhill road ahead of you. With the engine in gear and the driver securely belted to his seat, Roz and I gave the dishevelled car body a gentle push. Like a defibrillator restoring a heartbeat following cardiac arrest, the car finally, after a violent cough and a splutter, returned to life. Quickly out of sight, the hum of the motor, followed by a toot of the horn, told us that everything was okay, at least for the time being.
Moments later, still saddled with the terrible thought that I might just see a broken-down SEAT along the road, I finally began my own journey along the A-343 towards the once-Moorish stronghold of Loja. The next 60 kilometres of hard riding thankfully told me I hadn’t.