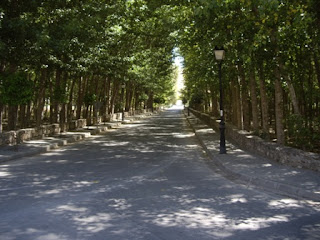 Normally, beginning a brand new cycling day on high ground is like having money in the bank. You have it at least for a while, until you spend it frivolously on some exorbitant want you don't need that ends up taking nothing but space in your already over-cluttered garage.

Leaving Montefrio, with its altitude of more than 800 metres could have easily been like that; I had metres to burn but soon the descent would  most likely be a passing memory  and I'd be approaching the foot of another climb with no way out but upwards in the hot, shade-less sun. Rather surprisingly, that's not exactly how my day started out. 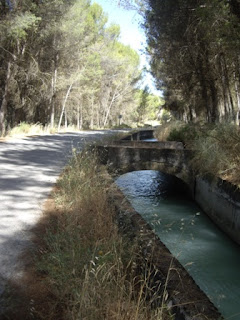 Twenty kilometres due south, along the A-335 towards El Turro is the Rio Cacin, nothing more than a gently flowing canal, pleasantly accompanied by a quiet road lined with trees. Canals are a friendly feature to cycle along, even when travelling against the flow. The same could be said about any waterway, especially in the south of Spain where the shade is scarce. While short lived, the near-hour's ride through heavily pined forest was a transient oasis in what would soon become semi-desert.
*****

The final Muslim city to fall to the Christians, Granada stands at the foot of Spain's Everest, the Sierra Nevada mountain range. Populated since Palaeolithic times, significant parts of Andalusia, including the region that is now Granada became occupied by Moorish inhabitants following the Umayyad conquest of Hispania during the early 8th century. 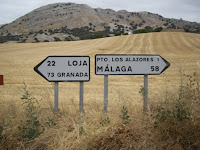 Soon one of the most important Moorish cities in Spain, Granada continued to expand its frontier under the Almoravid and Almohad dynasties. With the departure of the incumbent Almohad prince in 1228, a military leader from the Jaen region, Ibn al-Ahmar, established the longest lasting Muslim dynasty on the Iberian Peninsula-the Nasrids. While in continual conflict with the Christian kingdoms of the north, the Nasrids aligned themselves with Ferdinand III of Castile, officially becoming the Emirate of Granada, in 1238.

In 1249, the Portuguese Reconquista came to an end with Alfonso III's conquest of the Algarve, leaving Granada as the final Al-Andalusian state on the Iberian Peninsula. Providing sanctuary to the large numbers of Muslims fleeing the Christian Reconquista, the dynasty reached its political and cultural zenith during the latter half of the 14th century. Powerful and virtually self-sufficient in its own right, it prospered for centuries after the fall of its Andalusian neighbours, Sevilla and Cordoba.

It wasn't until January 1492, the same year Christopher Columbus sailed out of Palos de la Frontera, Spain, on his way to the America's, that Granada was handed over to the Catholic monarchs Ferdinand and Isabella of Spain, following an eight month siege. While the city would leave a lasting influence, culturally, artistically and architecturally, Al-Andalus ended as a political entity on the Iberian Peninsula.