Another Dramatic Day In The Pyrenees - The Plateau de Beille


It was a breath of fresh air to see Team Katusha rider, Joaquin Rodriguez, power away to win the 12th stage of the Tour de France. The 195 kilometre stage from Lannemezan finished in driving rain up the top of the brutal Hors Category climb, Plateau de Beille. Further down the road, playing second fiddle for a change, was Chris Froome (and his Sky team) doing their utmost to stave off attacks from his nearest rivals.


Sprinters, breakaways and admiring France’s magnificent scenery will be the focus for the next few days, while we wait (until next Wednesday) for the real battle to recommence when the race reaches the Alps.


My one and only climb up the Plateau de Beille, just three years ago, was an unexpected surprise when I unknowingly joined a multitude of cyclists who were competing in an event. My travels up these mountains were usually an individual experience, save for a few cows and the occasional appearance of Roz who had taken to parking two or three kilometres from the summit before walking up to meet me at the top. This time, the 16 kilometres of steep road was choked with cyclists, while the broad tarmac literally contained hundreds who had already completed their own slow passage to summit. 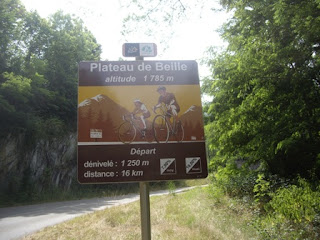 Much later that evening we enjoyed dinner at a tapas bar in Ax-les-Thermes. The place was absolutely packed with locals enjoying the European Football Cup between Spain and Italy. Judging from the applause by the predominantly French crowd, Spain’s win was met with emphatic approval. Close to the Spanish border, there is obviously a much higher regard between both countries’ inhabitants than in the United Kingdom, between the English and the Scots. 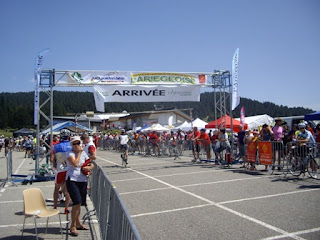 Dutch cyclist Wim van Est would have experienced something akin to these two extremes way back in the Tour de France of 1951. Being the first ever Dutchman to wear the prized yellow jersey, he tragically fell on the Col d’Aubisque’s first hairpin down the eastern side. After rolling 70 metres down the steep and slippery slope, he miraculously came to a sudden stop on a tiny flat ledge no bigger than the seat of a chair. Where his bike was he had no idea, but the ledge was the only thing that saved him from what probably would have been a very gruesome and unfortunate death. Miraculously, he sustained no severe injuries, just bruising and shock. Meanwhile, the peloton continued its frenetic descent down the mountain towards the Col du Soulor. So sudden was the Dutch rider’s fall that most riders were totally oblivious to what had occurred.


So what do you do when a lowered rope is not long enough to pull you up the side of a mountain? Simple—you tie bicycle tyres together to make a long rubber rope. Improvisation at its best. Stretched tyres ruined the Dutch team’s chances of continuing the stage, but they at least enabled van Est to be hauled up the mountain to a waiting ambulance.

Nowhere near in the same hurry as the Dutch rider on that fateful day, I stopped to take a photograph of the monument that marks the spot where he came to grief. Standing a good 5 metres from the edge on a fine, windless afternoon, I still felt a little uneasy. If you’re lucky enough to pass it, it reads—in French, of course—“Here on 17 July 1951 the cyclist Wim van Est fell 70 metres. He survived but lost the yellow jersey.”

On the eastern descent down the Col d’Aubisque I passed the Col du Soulor, which at 1,474 metres is a pretty formidable climb in itself. Its 21 kilometre ascent averages 5.7%, should you decide to climb it from the small town of Saint-Savin. The initial descent between the two summits was the most dangerous part of the entire journey downhill, particularly a 90-degree corner about a kilometre from the very top. I don’t know how the pros could even go around it without slowing right down, particularly if in a bunch. One thing’s for sure: I wasn’t nearly as brave as the Flying Dutchman, Wim van Est.

But while there was cause for caution, there was a case for sheer wonderment as well. The views, especially down into the valley below, were breathtaking. Around the bends in the road lay one amazing view after another, and it never ceased until I’d rolled my way back down to the foot of the valley close to the outskirts of Lourdes. 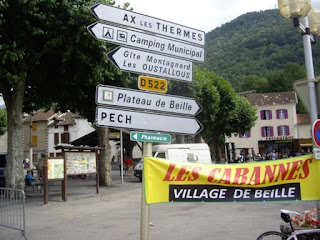 Emerging from a tunnel, one of the many I would travel through on my journey through the mountains, I caught sight of another lone cyclist in the distance. Heading towards me, he looked to be about a kilometre away. Dwarfed by the massive granite wall above him, he appeared such a minute and insignificant figure, even as he drew closer. We both nodded as we passed one another. Though travelling uphill, he seemed to be moving almost as quickly as me on my descent. Right then and there I had a moment. It had nothing whatsoever to do with his lycra bike shorts; it was just one of those euphoric moments we sometimes have when moved by someone or something. It was as if nature had been patiently sculpting these wonderful mountains and valleys for 80 million years, just for me. I thought then, and I still think now, more than 12 months later, how lucky I was to be here on this day.....


Extract from my book: 'Lycra, Lattes and the Long Way Round'
Posted by markkrieger at 20:46