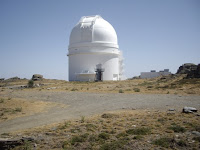 Reluctantly drawing myself away from what could have been the quietest place on earth, I felt mildly bemused that I hadn't yet seen a solitary person on my time on the mountain, let alone another cyclist; and nothing was about to change during the next hour of riding! until I reached the comparatively busy A-334.

Pleasant for a while, it soon became a syphon for anything travelling east with four wheels and a reverberating engine. If the area near the giant horseshoe of road that is the Calar Alto is virtually bereft of human settlement, then the 16 kilometre stretch between Purchena and Albox had the rest of the country's population travelling towards the Mediterranean coast for the holidays. Road cycling can be a lot like that, especially through the hills of southern Spain.

Marked on my map as a planned autovia straddling the existing road, the only way forward seemed the motorway itself. Once on these things, its like the plane you are in has just left the tarmac bound for somewhere way in the distance. You're all of a sudden in someone else's hands. 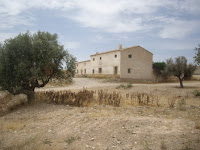 With the prolonged blasts of car horns ringing in my ears, I could do little but pedal as fast as I could, all the time longing for a slipway to appear. It never did, at least not in the way I was hoping. The only alternative available seemed an access road to an industrial estate, nothing more than an enclave of empty factories along dead-end streets, none of which were any help to me. Almost deserted and with no road going anywhere, other than the route I came in on,  I reluctantly started backtracking towards the motorway. 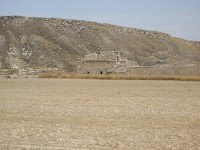 Just then, out the door of one of the factories, appeared a young man in overalls. He was heading towards his car, parked out on the road. Despite the short conversation, with hardly a word understood, I learned enough from his raised arm motioning me towards the motorway to realise what I already knew; l had no alternative but to put my head down, try to ignore the unsettling blasts of the accompanying traffic and ride as fast as I possibly could.

It's surprising how quickly you can travel when you have fear at your back. It seemed only a matter of moments before I reached a smaller road off the motorway. Though it might take me back into the mountains, I thought, where travelling is often slow, far better to the tune of nature than human intervention.

Already well past the time of day when I should have been enjoying a beer with Roz, I arrived at a cafe-restaurant on the outskirts of the small village of Zurgena. Uncertain of the road to take, I approached two rather portly middle-aged gentlemen sitting at a table out the front. Englishmen on vacation, their faces as red as twin London telephone boxes, they were the only ones the slightest bit interested in my predicament.

With shirts unbuttoned and looking the worst for wear, having spent the afternoon sipping beer in the hot Spanish sun, they provided me with more instructions than you'd find on a Google map; except, rather ironically, the first few kilometres. They just couldn't agree on which of two unmarked roads I should take. One suggested the road to my right, which I presumed would take me deeper into the mountains, and the other, the one to my left. 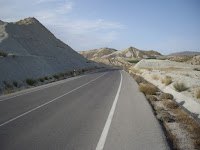 Sometimes you just need to make your own decisions and suffer the consequences. More confused than I felt just moments earlier, I thanked them for their good intentions and left them still engaging in vigorous debate about who was right. With time on the wane, I'd already decided to head further into the mountains.

Cycling up a long, meandering road is physically tough but when it's late in the day, you've been riding since early morning, and worse still, you're not exactly sure where the climb will take you, it becomes every bit  as much a mental challenge. With more hope than vigour, I followed the gentle curves in the road until they led me to another unmarked long string of bitumen heading east, towards the sea. Possibly one of the roads my English acquaintances were arguing about, it led down into a steep valley, that perhaps included the town of Cuevas del Almanzora.

Soon feeling reassured by the number of of passing cyclists slowly climbing from the opposite direction, I could finally afford myself the hard-earned thought of finding our overnight stay before dusk. Swivelling my head from left to right, as I tiredly pedalled down the town's busy main street, a huge cheer from the hotel's proprietor and his patrons dining at tables out the front told me that I'd finally arrived. Not much before ten in the evening, it was a welcome relief.