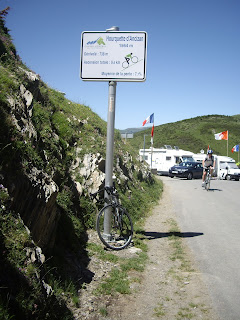 Predominantly in shade for most of the way, the Hourquette d’Ancizan provides a magnificent alternative to the more exposed slopes of the Col d’ Aspin. (Just as the French word ‘Col’, meaning neck or collar, is used in the name of many Pyrénéan passes, so too is the less familiar term ‘Hourquette’.  Derived from the Latin word ‘furca’, meaning ‘fork’, it is used to identify a U shaped mountain pass).While slightly longer than the Col de Val Louron-Azet and with a similar gradient, it’s nevertheless the kind of climb where time seems to move quickly and you along with it. But it is its descent that fascinated me most of all. From the moment I spun around the switchback on its narrow and busy summit, the view of the valley below opened up in front of me. 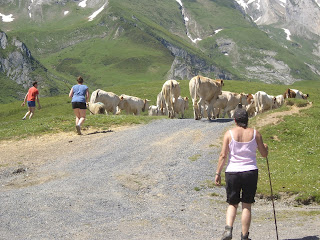 After swiftly zigzagging its way down to a small stream, the Ruisseau d’Artigou, the road unexpectedly rises for 700 metres before dipping once more. Soon you're travelling through lush, open landscape dotted with small grey stone huts, the cabins Camoudiet, which provide sanctuary for cows and sheep and the shepherds who tend them throughout the summer months. As if by design, rather than chance, the road’s contour then heads through a beautiful line of beech, before guiding you left, then right, back into open country once more. 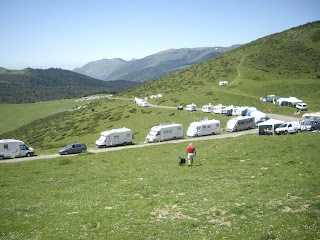 The remaining six kilometres of downhill tarmac is like a Roman skateboard ramp designed for neophytes-very gentle.  Not normally as popular as the D918 route linking the Aspin and Tourmalet giants, I passed another unbroken chain of mobile homes, sentries standing in readiness to salute the passing parade due to arrive in only a couple of days. Soon, the road crosses the d’Artigou for a second time, accompanying it through pine forest and open meadow before a brief separation and one final meeting as a new entity-the Adour de Payolle-at the very bottom of the descent.
Across the bridge is the intersection with the D918, which follows the valley floor for a handful of kilometres towards Sainte-Marie-de-Campan, the turning point to the climb up the Col du Tourmalet. It was here, at the site of the blacksmith forge that more than a century ago French cyclist Eugène Christophe was forced to scramble down the mountain, with bicycle in toe, to repair his own front forks.