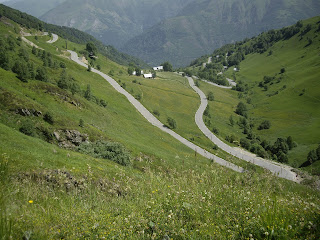 The small town of Luz-Saint-Sauveur is best known for being one of the two starting points up the Col du Tourmalet, the other being its eastern approach from Sainte-Marie-de-Campan. But lying quietly on the other side of town is the ski-station of Luz-Ardiden.


Accessible via the D921 and in turn the D12, the climb up the Luz has served as an occasional stage finish to the Tour de France since 1985. Its last appearance was in 2011, when Spanish cyclist Sammy Sanchez won the stage 12 race ahead of Belgian rider Jelle Vanendert and Frank Schleck. The 211 kilometre stage from Cugnaux, included three massive climbs, the Hourquette d'Ancizan, Tourmalet and Luz-Ardiden.


Unlike the Tourmalet, along with the Col d'Aubisque, which are by far the most popular climbs in the Pyrenees, Luz-Ardiden is the perfect setting for cyclists who prefer their own company. A Hors Category climb in its own right, it quickly shrugs off its gentle beginning before hovering between 7 and 9% over the final 12 of its 15 kilometres. 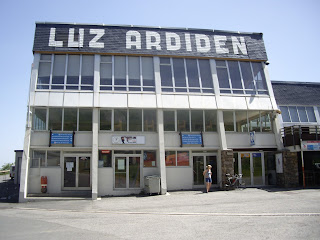 The one and only time I climbed the Luz was back in 2012. A beautiful sunny morning in July, my only company were a young couple from England, and Roz, who as per usual, walked the last three kilometres up to the summit. A magnificent approach, via its zigzagging road, it was exactly as I expected when I reached the top; empty, a far cry from its snow-covered winter tarmac and for that matter, the Tour's carnival-type atmosphere of four years ago. While an open kiosk selling cold beer at the summit would have quenched our parched throats, the thrill of the climb and the view and stillness that it provided made it well worth the effort.