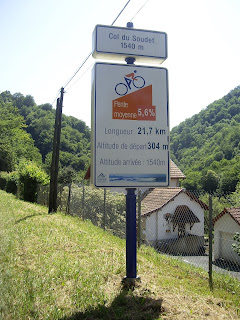 The Col de Soudet begins its meandering journey along the D26 from the small Basque village of Tardets-Sorholus.  Close to the Spanish border, in France's south-east, it's one of the first checkpoints for the Raid Pyrenean.   ﻿﻿

The col has appeared intermittently in the Tour de France since 1987. Its last appearance was as recently as last week when Chris Froome and Richie Porte made their emphatic 'catch me if you can' statement in the Stage 10 climb from Arette, up to La Pierre-Sainte-Martin.

Belying its 4.4% average gradient, the Col de Soudet is a relentless climb. After 7 kilometres of false flat, the D113 turns south-east towards Sainte-Engrace. It's here, with 10 kilometres still remaining, that the narrow road, only built two decades ago, drastically rises to an average of 8.3%. Lonely, like the road up Luz-Ardiden, the heat, the length of the climb and gradient begin to take its toll.

Closer to the top, the tarmac rises above the trees, replaced by bare rock no matter which way you look. A painstaking final few kilometres in the hot afternoon sun, it's more a relief than a cathartic experience to reach the Col de Soudet's broad and inhospitable moonscape summit. Remote and bare, you'll find it your only  company until you either decide to punish yourself further by climbing another 1.4 kilometres to La Pierre-Sainte-Martin or descend down the D132 towards Arette. 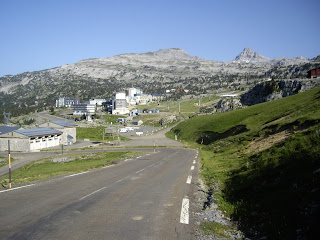 Not yet having the opportunity to return, I'm today satisfied I slowly pedalled on. Absolutely spent, I certainly didn't feel it at the time.