TheTour Reaches The Heart Of The Pyrenees 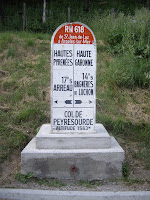 While Bill Paxton's character in the movie Twister, Bill Harding, loved chasing tornadoes, cyclists have an insatiable appetite for climbing mountains. It's a bit like bagging a Fell in England or a Munro in Scotland. Anyone who has heard of or ridden any part of the Route des Cols in the French Pyrenees will know exactly what I mean.
No wonder the Tour de France finds a reason every year to visit this spectacular mountain chain. Climbs like Col d'Aubisque, Hautacam, Col de Marie Blanque, Col de Peyresourde and Plateau de Beille have helped make the event what it is today. This year's climb up the Col d'Aspin, followed by the Tourmalet, the most frequently visited mountain in the Tour, are no exception. Since the introduction of mountain climbs way back in 1910, the Tourmalet alone has been included in the famous race an incredible three out of every four years.


Fascinated the moment I cycled into Pau and saw some of the Pyrenean snow-capped peaks, I have been writing about them ever since. Here's a few snippets from Chapter 7 of my book, titled A Pyrenean Adventure; and an adventure it was.

Besides wanting to ride all the way around France, I was here to experience as many cols and montes as the budget and body would allow. Was I excited? Yes. Was I a little nervous? Definitely. Was I looking forward to it? You betcha!

Despite my late start to the day’s ride—a midday lunch in a Bayonne tapas bar being too tempting to resist—the 130-kilometre ride to Pau was wonderfully enjoyable. In no time at all I found myself travelling along quiet, undulating roads, while in the distance, and to my right, was the remarkable mountain vista they call the Pyrenees. But it wasn’t until I arrived in Pau itself and began heading down its main street that I realised their sheer magnitude.

Like a chain, the Pyrenees stretch approximately 420 kilometres west to east, from the Atlantic coast to the Mediterranean Sea. A magnificent frontier, they divide the dry, barren landscape of Northern Spain from the lush, fertile hillsides of Southern France. Made from older rocks deposited during the Paleozoic era, the Pyrenees rose up— sometime between 20 and 80 million years ago—when the Iberian landmass, now known as Spain and Portugal, collided with the much larger Eurasian landmass. Their highest peak is Spain’s Pico de Aneto, all of 3,404 metres, while their permanent snowline sits around 1,800 metres. This can be pretty scary when you’re climbing up on your bike, but stunningly beautiful too.

From our view along the Boulevard des Pyrénées, the magnificent snow-capped peaks dominated the landscape; some are more than 3,000 metres high. The orientation map, which looked more like a dark network of veins and capillaries, provided a list of them all. Some of them were along mountain roads, while others, which were usually higher, were only accessible by foot. Looking at the extraordinary vista in front of me, one a little to the left stood out among the rest. Snowcapped and considerably imposing, it couldn’t possibly have been accessible by road. That would only be a privilege afforded to some of the lower peaks. Well, so I thought. In a little less than 24 hours I was in for a rude shock. I didn’t realise it then, but that was the Col d’Aubisque. 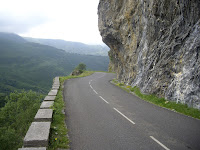 The Col d’Aubisque first appeared in the Tour de France in 1910. In fact, no mountains, let alone the Pyrenees, were a part of the Tour until that year. Back then, riders didn’t have the luxury of sophisticated gearing systems, bitumen roads, state-of-the-art bicycle frames and wheels, and wind- resistant helmets or dieticians, while words like carbon fibre, altimeters, gel seats, heart monitors, compact cranks, and, god forbid, lycra, weren’t even part of the cyclist’s lingo. You wonder what the topic of conversation during training was back then. Certainly not the latest whizz-bang bike computer that tells you everything from the number of calories in last night’s pasta to how many vertical metres you climb across the Nullarbor Plain—not many, I’m told.


The Pyrenees were first included at the insistence of Adolphe Steinès, a colleague of Henri Desgrange, the man responsible for creating the Tour de France back in 1903. But Steinès first had to convince the Tour organiser that it was possible to send cyclists up heights of above 2,000 metres on what virtually amounted to unmade horse tracks. That wouldn’t be possible until he made the trek himself, a trek that in the height of summer, let alone winter, was fraught with danger.

In late January 1910, a mere five months before the race’s scheduled start, Steinès ventured by car up the Col du Tourmalet. Close to the top, there was so much snow that the car conked out and he had to go the rest of the way on foot. Determined to succeed in finding a car route over the mountain, he walked through more than half the night and wasn’t rescued until 3.00 am the following morning. But his heroics succeeded, transforming the new re-routed version of the Tour de France into the greatest sporting feat of endurance the world had seen. As a result of this reckless new innovation, gears were used for the first time, by a handful of riders, while a sag wagon was introduced to pick up cyclists who dropped out during the race. And there would have been plenty. 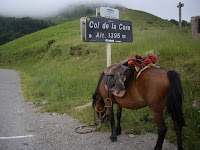 The 1910 Tour consisted of 15 stages over 4,737 kilometres, and the average speed of the riders was a staggering 28.70 kilometres per hour. This time was all the more remarkable given that only one rider, Gustave Garrigou, reached the top of the Tourmalet without getting off his bike. Of the 110 starting cyclists that year, only 41 finished. The eventual winner, Octave Lapize, was, fittingly, a Frenchman. He received 5,000 francs for his victory and, of course, a place in history as the first cyclist to win the newly transformed Tour de France.