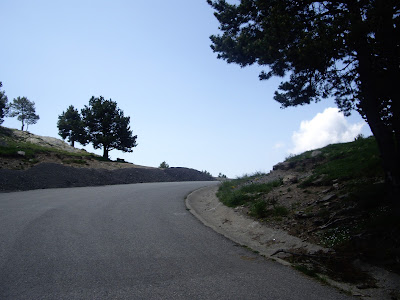 Though less than a 12-kilometre climb, via Aixovall, the Collada de la Gallina resembles the infinitely more popular Alpe d’ Huez in some ways. One of the jewels in the French Tour’s crown, the Alpe is best known for its 21 switchbacks which claw up the side of the les Deux Alpes at an 8%average gradient.

...Having done all the hard work for the day, it was basically downhill all the way. But I couldn’t resist a final side trip up Alpe d’Huez before heading to our accommodation at Grenoble. A few hundred metres along the D211, from the tiny town of Bourg d’Osians, it’s a 14.5-kilometre climb with an 8.1% average gradient. And it felt like it too, particularly nearer the bottom where its 21 hairpin bends, named after riders who have won there, wrap themselves around the mountain.


The climb up Alpe d’Huez reminded me a lot of Italy’s Monte Zoncolan. The only difference was the Italian mountain’s steeper gradient and the approach towards the top. I found Zoncolan far more rugged and remote, made so by its tunnels, snow-lined road and barren peak. Alpe d’Huez is more of a tourist spot, with its broad ski-station summit, shops and restaurants. 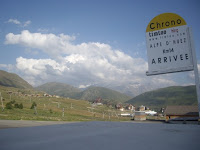 What makes climbing Alpe d’Huez so difficult is not just its length and unrelenting gradient. For Tour riders anyway, it’s more to do with the fact that the summit comes at the very end of a long mountain stage. At the end of my long day, I was happy to have reached the very top in less than 90 minutes, only some 50 minutes slower than Marco Pantani’s 1995 record climb of 37 minutes, 35 seconds. The comparison beggars belief, but as I left the swarm of eateries, hotels and shops behind me, I still felt like a winner...
Lycra, Lattes and the Long Way Round 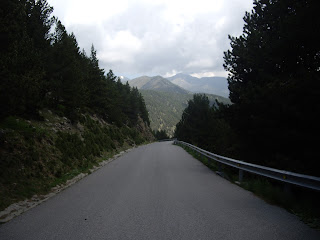 While the Andorran mountain has nothing but flat tarmac to entice you to its bare summit, its number of switchbacks are almost the same - I counted 22 - and it climbs at an even higher average gradient (8.3%). A Hors Categorie  climb, like the Alpe d’ Huez itself, it first featured in the Vuelta in 2012 as a stage finish, and again in 2013.

It also reappeared recently, in what was  regarded as the most difficult stage of this year's Vuelta a Espana. The Collada de la Gallina was the fourth of six climbs which finished atop of the Alto Els Cordals de Encamp; hard to say and no doubt, much more difficult to climb.


Unlike the French mountain, which was as crowded as New Year’s Eve in Times Square, when I climbed it back in 2009, the Collada de la Gallina is unpretentiously inconspicuous. Less than four kilometres from Aixovall, just past the small village of Bixessarri, the gradient increases significantly. It's from here, as its  lacets wind steeply up the road for the next five kilometres, that thoughts of the Alpe d' Huez  might arise. They certainly did for me.

Nevertheless, beautifully quiet and remote, with nothing but the sounds of your own breathing and a grinding chain, the mountain will be yours and yours alone Don't expect any favours towards the summit however, particularly the penultimate kilometre of above 10%.  With little to greet you at the top of the climb, there's not much to hold you, save for the thrill of having climbed a very formidable, and in many respects, mystical mountain.