The Pyrenees were first included at the insistence of Adolphe Steinès, a colleague of Henri Desgrange, the man responsible for creating the Tour de France back in 1903. But Steinès first had to convince the Tour organiser that it was possible to send cyclists up heights of above 2,000 metres on what virtually amounted to unmade horse tracks. That wouldn’t be possible until he made the trek himself, a trek that in the height of summer, let alone winter, was fraught with danger.

In late January 1910, a mere five months before the race’s scheduled start, Steinès ventured by car up the Col du Tourmalet. Close to the top, there was so much snow that his car conked out and he had to go the rest of the way on foot. Determined to succeed in finding a car route over the mountain, he walked through more than half the night and wasn’t rescued until 3.00 am the following morning. But his heroics succeeded, transforming the new re-routed version of the Tour de France into the greatest sporting feat of endurance the world had seen. As a result of this reckless new innovation, gears were used for the first time, by a handful of riders, while a sag wagon was introduced to pick up cyclists who dropped out during +the race. And there would have been plenty.
Lycra, Lattes and the long Way Round


﻿﻿
Climbing the Col du Tourmalet is difficult enough just from the lively spa-town of Luz-Saint-Sauveur, but first you have to get there. Often ridden in tandem with the Col d' Aubisque, no sooner are you down the bottom of one huge climb before you're feeling a little uneasy about the next. Both are as difficult as the other, with a brief respite in between. 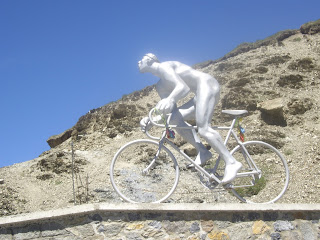 The difficulty of the climb is not just the gradient, which incessantly hovers around 9%, but its straightness over long sections of the journey. There’s nothing more demoralizing than the extended view of a steep tarmac out in front of you and the Tourmalet has plenty of these to keep you grimacing.

Almost half-way to the top, or as least as close as I convinced myself I was, was the ski and summer resort of Barèges. With its thermal springs - the highest in Pyrenees - and camping amenities, it  hardly befits a climb with so much history attached to it.

The moment you leave Barèges, the road soars sharply, agonisingly so. A test of your sincerity, if you really prefer the unspoiled beauty of nature to the spoils of human intervention, then you’re going to have to earn it!


Soon the landscape begins to change, firstly a ‘pleasant’ stretch of tree-covered road. On its left is a wide strip of open ground, most likely a river during winter months. From here, following a gradual bend that veers right, and then left, you quickly discover why the Tourmalet has been used in the Tour de France more than any other. Sheer, exposed and incessantly steep, its remaining 7 kilometres test your resolve.

The colossal expanse that is the Haute-Pyrenees is finally splayed-out before you, should you have the energy or inclination to lift your head above the handlebars. If you’re game you’ll view the often snow-covered upper reaches of Pic du Midi deBigorre, towering above the Tourmalet itself. 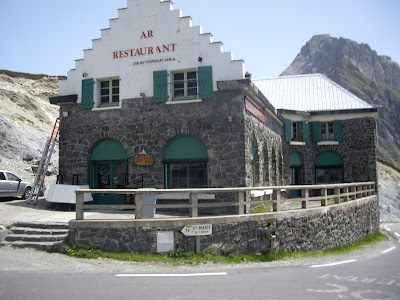 Engulfed by yellow rock on what could be a wasteland on another planet, you instinctively follow the road, now winding on and upward as it hugs the high wall on your right. To your left is a gaping cavern that seems to have no limit.

With the top almost in sight, the road executes its final twists and turns, hardly a hiccup compared to the long and intimidating grind up the valley. Now there, you deservedly take the opportunity to absorb the magnificent views down each side of the col.  Unsurprisingly, the road down, especially towards Sainte-Marie-de-Campan, and the site of Eugene Christophe’s famous blacksmith shop doesn’t seem so bad.
Books by Mark Krieger:


“Ride as much or as little, as long or as short as you feel. But ride”.
Eddy Merckx, Belgian road cycling legend