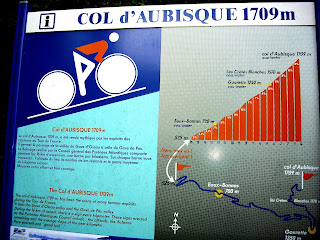 In contrast to the tame summit approach up the Marie-Blanque, the Col d’Aubisque was relentless and unforgiving, averaging more than 8% over its final 6 kilometres. It took me around 90 minutes to complete the 16-plus kilometres, the last four seeming endless. But once at the top, it’s amazing how quickly the discomfort you’re feeling goes away. In hindsight, it was probably no harder a climb than the last 10 kilometres up Falls Creek from Bogong Village back home in Australia, but the view is so much more rewarding. Whirls of white snow were dotted like clotted cream along grey granite peaks. From a distance, the lush green tundra looked like a bowling green. And instead of the searing heat and haze which taunts you at the top of Falls Creek on a late January day, there was a slight chill in the air and a blanket of grey cloud.


Lycra, Lattes and the Long Way Round


Similar in length and gradient to the Col du Tourmalet, there isn’t much that separates the two giants of the Haute-Pyrenees. Save two kilometres of distance and a 0.2% average gradient, it basically comes down to pure and unadulterated subjectivity.

Labelled the ‘Queen of the Pyrenees’ and regarded by most as its second-hardest climb, the Col d’ Aubisque has stood in the Tourmalet’s shadow since their combined introduction to the Tour de France in 1910. Nevertheless, having experienced these twin leviathans myself on numerous occasions, just one thing, for me, turned the balance the other way.

Indellibly entrenched in my brain, since I climbed it for the very first time, are the tedious last few kilometres towards the Col d’ Aubisque’s summit. It’s as simple as that!  Further from the top than it seemed to be, the winding road from Gourette ski-station seemed to go on, and on, for an unremitting eternity.

Beginning at Laruns, the climb starts out a little like the Tourmalet; the easiest riding is at the beginning. Despite a 7% gradient over the first kilometre, by the time you reach the village of Eaux-Bonnes, 5 kilometres up the road, you’ve climbed at a comfortable 5%, or even less, for most of the way. But the bad news is, from here you’ve got 11 hairpins, an average gradient of almost 8%, along with some sections as high as 13%, to negotiate before you reach the top of the col’s imposing summit. So don’t expect to get there in a hurry.

As you’ve probably guessed by now, the road out of Eaux-Bonnes soars sharply before swinging into 3 kilometres of long bends. While the landscape remains the same, still heavily treed, the gradient continues to rise. Now half way, you’re climbing at 10% for the next kilometre, with little more to look forward to than an 8 to 9% gradient for the rest of the climb.

Having little more to look at than the rising wide tarmac before you, you’re likely to welcome the twin snow tunnels that tell you that the winter resort of Gourette is not far away. The real climb already begun, there’s much more to endure before your sitting on the Aubisque’s fabled summit. 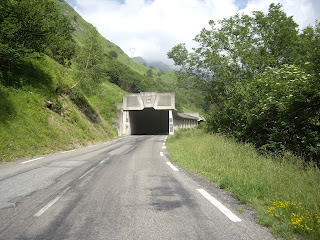 Cycling through the tunnels reminded me of Thor Hushovd’s unlikely victory in Stage 13 of the 2011 Tour de France. More of a sprinter than a climber, he took off up the Col d’ Aubisque’s lower slopes in pursuit of breakaway leader Jeremy Roy.

The SBS television coverage of the frenetic finish of the race was quite memorable. So too the commentator’s reaction to the Norwegian cyclist’s  initial charge up the col. Suffice to say, he didn’t hold high hopes of Hushovd staying with the others by the time the breakaway group went over the top. 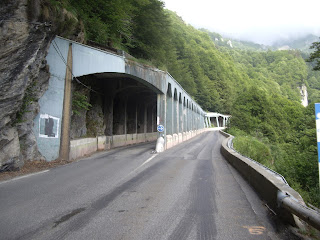 Gradually reeling in Roy down the slopes of the Col du Soulor, with the help of another French cyclist David Moncoutié, Hushovd put down the hammer with two kilometres remaining and sprinted to what just hours earlier would have seemed an astonishing victory.


A conglomeration of bars, restaurants and  hotels, the Gourette ski-town is nothing more  than an annoying distraction. To cyclists anyway, its a slab of concrete that heaves you back onto the road that eventually takes you to the top of the pass.


From here,  with  almost  5 kilometres  still to
travel, the climb seems at its most foreboding.
Now a long, sweeping U-shape, the road turns back on itself. The deep chasm separating the ski-station and the Col d’Aubisque’s bare summit, only serves as an illusion to conceal the distance left along the steep, narrow road ahead. With the 8 and 9% gradient testing not just your resolve but your patience, the only compensation are the teasing glimpses of the bleak massif still above; always lurking but never appearing. That is, until one last turn and a final surge that you probably don’t even feel, and you’re there.

Often cold and grey, made even colder by the snow-covered peaks of the Pic de Ger that dwarfs the Gourette ski-station, there’s not much to hold you atop of the Aubisque’s exposed summit, save for its popular café and sweeping views; albeit some of the most spectacular in the Pyrenees. Besides,  an unforgettable descent and many more magnificent views await just over the other side!