The Vuelta a Espana: My Ten Most Difficult Climbs: No. 10 - Eth Portilhon (Col du Portillon) 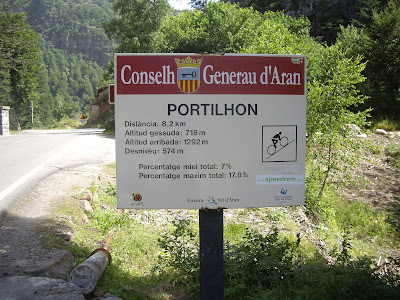 
Spain's Eth Portilhon, or the Col du Portillon from the French side, provides a convenient passage between the two countries. Comparatively short and heavily forested, the route over the col was once a popular passage for smugglers during decades gone by. 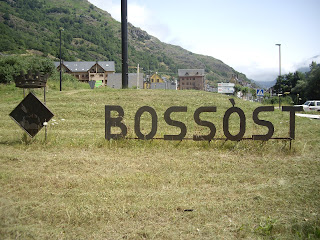 Cycling-wise, no matter what you call it or from whatever side you climb it from, you’ll still leave a lot of sweat behind you on the road. Geographically much closer to other passes and valley towns on the French side of the border, the col has appeared significantly more often in the French tour than the Vuelta a España.

Having ridden more than 150 kilometres through the heat and humidity, I was expecting a more gruelling climb than my previous ascent, from Bagnères-de-Luchon, just 12 months earlier. Yet, if anything, I’d underestimated it.

Slightly steeper but shorter in length, the Spanish climb is less interesting than its French counterpart, more exposed too, especially the first 4 kilometres of road which steadily winds its way up to a lookout facing the high peaks to the south.  With the sun’s haze tarnishing the view I’d seen better panoramas in a snowstorm, but truth be told, I simply needed an excuse to get off my bike.  Rarely, if ever, had I stopped for a break on the way up a climb but my feet were on fire inside my shoes. Sometimes it doesn’t matter how well your blood might be circulating around your body, it just doesn’t always make it to your toes, especially when they’ve been in a fixed position for most of the day.


The rest of me felt great, well as great as a 59-year-old body can feel. Almost like sipping a warm fortified wine on a cold day, it was surprising how quickly the ache disappeared once I restored my circulation. The remaining few kilometres to the top of the climb, averaging between 7 and 8%, weren’t painless but they were at least through delightful woodland and I could still feel my feet.

Downhill all the way, from the moment you roll over Eth Portilhon’s summit, it's just a matter of moments before you're gliding through the streets of one of the most quintessential towns in the French Pyrenees, Bagnères-de-Luchon. 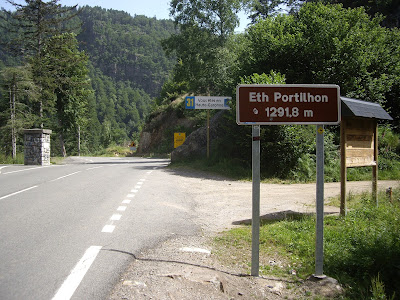 Next:
My 9th Most Difficult Spanish Climb - Alto de la Rabassa
Posted by markkrieger at 23:29