The Vuelta a Espana: My Ten Most Difficult Climbs: No. 9 - Alto de la Rabassa 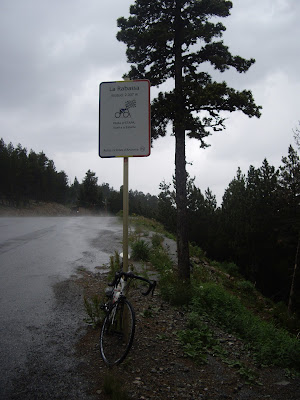 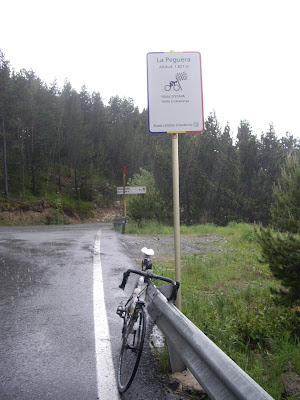 One of six ascents included in stage 11 of the 2015 Vuelta, the Alto de la Rabassa is a formidable climb in its own right. Also appearing in the Spanish Tour in 1999 and again in 2000, its most recent appearance as a stage finish was in 2008. The longest and most gruelling stage of that year’s race, 223 kilometres over 4 categorised climbs, it was won convincingly by Italian cyclist Alessandro Ballan.

A bit like the Italian rider who dropped his breakaway companions to win by almost 3 minutes, my climb up the Alto de la Rabassa was in blissful solitude. The steepest parts of the climb, its first 7 kilometres, were soon well behind me. The cold air and greying atmosphere, clear signs of an impending thunderstorm, didn't detract from the stunning views of snowcapped peaks and verdant pine forest.
Approximately 4 kilometres from the summit is La Peguera (1821m). From here, the gradient eases to just 5%.  Steadily approaching the Naturlandia Eco Theme Park, which lies at the mountain’s summit, I thought nothing, save hailstones, would be menacing enough to quash my desire to absorb the beautiful surroundings beyond my handlebars.
Nevertheless, it’s amazing how quickly you can change your plans once nature threatens. Remaining just long enough to learn that the theme park has the Tobotronc, the only snow toboggan park in the Pyrenees and supposedly the longest high mountain slide in the world, I began my uncomfortable descent in driving rain. As the hail, accompanied by more menacing bolts of lightning than those radiating from Tim the Enchanter’s thrusting fingers in Monty Python’s ‘The Holy Grail’, I suddenly wished I could have boarded the much-speedier railway toboggan and made my safe getaway down to the bottom.

Descending a mountain more slowly than the torrents that slide past is one of the most harrowing experiences for any cyclist. Often soaked through and shivering with cold, your fingers become frozen to the handlebars. Meanwhile, you slide around each sharp switchback like a snail fastened to a rock. 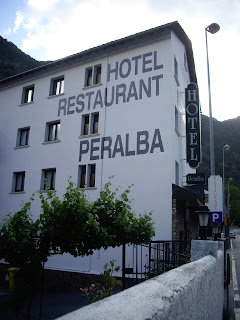 Surviving the descent unscathed, the Sant Julià de Lòria I’d departed from almost 3 hours earlier was awash. Hardly a person in sight, just rows of cars with their headlights beaming, it was as if I’d arrived in a London fog.

Ostensibly rowing rather than riding, the few remaining kilometres back to our accommodation at the Hotel Peralba, were not pleasant; indeed best forgotten. But as I climbed the stairs to our first-storey apartment, puddles rapidly forming behind me, I inwardly felt fulfilled having gained a hard-won glimpse of what this diminutive V-shaped principality in the Pyrenees has to offer.