The Vuelta a Espana: My Ten Most Difficult Climbs: No. 4 - Calar Alto 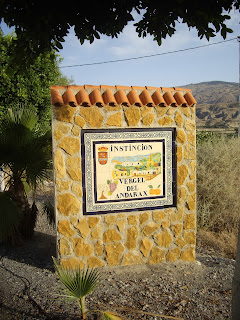 The Calar Alto has been climbed in the Vuelta on three occasions, in 2004, 2006 and 2009, each time from Gergal and on each occasion finishing at the the white-domed astronomical observatory on its summit. But supposedly more  encapsulating is the mountain's western route, via the white-walled village of Aulago. A 30 kilometre climb to a height above 2,100 metres, the attraction of this side is the changing landscape-should you be patient enough to persist over its 4.6% gradient-and its sheer isolation. A world away from the crowded slopes and summits of the likes of Mont Ventoux and Passo dello Stelvio, there's more chance of meeting an observatory employee on top of the Calar Alto than another cyclist. 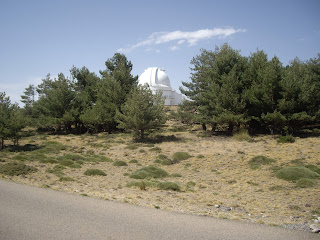 ﻿
Following the fatigue of almost two hours of climbing, the final seven kilometres to the summit offers some reprieve at last.  The depressingly uninterrupted views of the steepness ahead eventually give rise to more gentle twists and turns in the road, thinly lined with low pines. With the benefit of some shade and the white-domed observatory making ever-closer appearances the nearer you get to the top, you might even finally begin to feel justified that it was worth the indulgence after all.

Next:  My 3rd Most Difficult Spanish Climb - Lagos de Covadonga