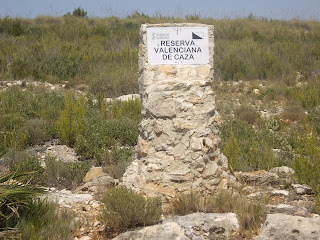 Once over the Alto de Millares, an imposter despite its impressive title, the terrain dramatically changed, before changing again. I was soon encircled by a seared forest, my only separation, the thin grey road in between. Bushfires had obviously torn through the area in recent times, leaving nothing but charcoaled corpses, their straps of bark left swaying in the wind.


A large mountain range, no less bare than the scorched earth I’d become accustomed to, soon stood before me. Below was a steep gorge. Its depth reminded me of Cares Gorge, in the luxuriant Picos de Europa National Park, that is until I noticed the barest trickle of water along its river bed. My map suggested it was the Rio Xúquer (pronounced ‘Júcar’), which travels more than 500 kilometres inland to the Mediterranean Sea. Either I was peering down at one of the river’s tributaries or the region’s recurring drought conditions were squeezing every bit of moisture out of what the lower waterway had left. 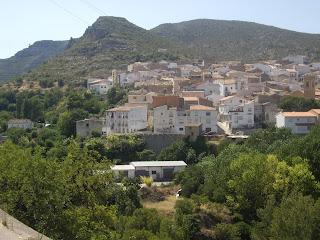 Hot, tired and dehydrated, and with 50 kilometres still to travel, I stopped off at a cafe-restaurant in Dos Aguas. A small and sleepy village like Millares, its solitary street felt as bleak and inhospitable as the lifeless landscape I’d followed since descending the Alto de Millares.

Despite most likely being the only option in the village, the cafe was almost empty. Two young girls and a guy sat at one table while a rather amorous middle-aged couple dressed in motorbike leathers were at another. Half out of their chairs, and seemingly stuck to each other’s lips like solvent cement, the pair had obviously found a more invigorating alternative to the dull surroundings out on the street.
Too tired and thirsty to be envious, I hobbled up to the bar to ask for a couple of beers. Presumably husband and wife, a man and a woman stood behind the counter. They were engaged in what could be at best described as heavy conversation. Speaking rapid-fire Spanish, I could only surmise what the topic might have been. But one thing was obvious; it was deadly serious.
It became a long, uncomfortable wait until one of the pair finally acknowledged my presence. With the woman still bellowing in his ear in an accusative tone, the scruffily dressed gentleman, who was trying his best not to notice, poured me my drinks. 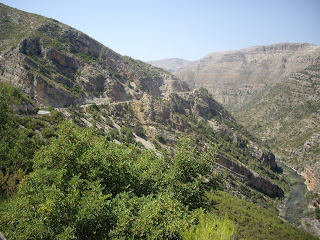 Meanwhile, the couple’s fracas continued almost unceasingly, the only hiatus being an awkward interruption when the occasional patron approached the bar. But it didn’t take much longer before the majority of those who remained soon realised that things weren’t going to get any better. Despite my own craving for one farewell drink, I certainly wasn’t going back to the counter myself. And neither did anyone else.


Tossing down the remains of my second glass of beer before heading outside, the commotion, if anything, was worse than it was when I first arrived. Despite the heat, I was glad to be leaving. Within moments, the cafe-restaurant had emptied itself out save for the smooching motor-bikers who’d remained oblivious to anything but each other’s presence. I almost admired their determination to shut everything else out. I guess that’s infatuation, or perhaps even love, for you.
Heading down the CV-580 towards Cheste, it took me just 200 metres to realise I couldn’t hear a sound. Reminding myself of the simple things in life, sometimes just the bliss of peacefulness, I felt my cycling life had just been restored to normal.