Drivers Versus Cyclists: Who Are More Irresponsible? (continued).

I’ve since returned to the Col de Turini but via a different route, one that isn’t quite so much used as a raceway. I’d be silly not to. Besides, any form of road travel involves some element of risk, not least where I live on Victoria’s Mornington Peninsula.

I won’t ever forget cyclist and author Mark Beaumont’s opinion of its drivers.  Of all the places he visited on his journey around the ‘world’, he claimed that the peninsula’s motorists were the most impatient and unsafe. Having ridden along many dangerous roads myself, especially in France, I don’t necessarily agree with him but I don’t disagree with him either.
Despite fate, there are only two reasons why you might come to grief on a bicycle; the negligence or irresponsibility of a driver or the negligence or irresponsibility of the cyclist himself. Despite always being cautious, even to the point of not venturing outdoors at all, there’s not a great deal you can do about some of the motorists out on the road. Whenever I’m riding, particularly up and down familiar roads around Arthurs Seat, I never miss an opportunity to wave thankfully to a driver who patiently slows down behind me on a descent or when I’m slowly climbing up around a sharp bend. 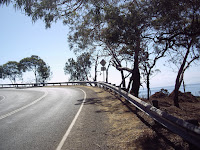 We live in a busy world where people are conditioned to feel like they’re always in a hurry. Wants, not necessarily needs, are more easily attained, often when we don’t even have the money to purchase them. Despite the government advertising, some drivers are going to drive dangerously and even drink while they’re driving; and some drivers who are cyclists every other day, will also do the same. I’d be a hypocrite if I said I’d never driven a car without being over the blood alcohol limit, especially in my younger days.

All the same, I’m content with the belief that there are far more responsible drivers, and of course people, out on the road, than irresponsible ones. I find myself these days expressing gratitude to the majority of motorists who show more patience than they’re credited for. Some even wave back!