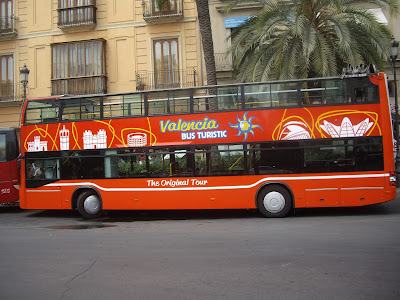 A rare day’s break from cycling, Roz and I spent the afternoon visiting Spain’s third largest city, Valencia. Having avoided most of the busy places along our journey so far, we couldn’t wait to garner a taste of the city’s blend of historical culture and space-age luminosity. And a taste was all we got. Spending half a day trying to get to know a city the size of Valencia is like sitting down in Hong Kong without ever leaving the airport; worse still if you spend most of your time on the transit bus. 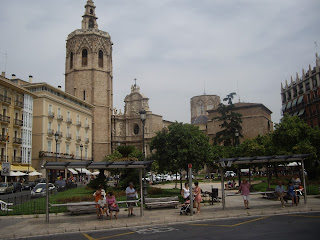 Having arrived by train and on foot in the heart of Valencia’s old town, Plaza de la Reina, we boarded the tourist bus for what we presumed would be a fascinating insight into the city’s historical and Mediterranean influence. For the price of 17 euro per person it seemed like a good idea at first but being glued to a seat in the Spanish heat for a good part of the day can make demands on your level of enthusiasm; certainly mine.
As the narrator continued unceasingly amidst the backdrop of a melodic Spanish guitar solo, the disposition of those sitting around us suggested that they too had had their fair share of Valencian architecture. The behaviour of a group of young Germans trying to perform their own rendition of a guitar routine suggested they were enjoying the music more than the history lesson while a middle-aged gentleman in the opposite aisle lay slumped across his seat.
Barely awake myself, for some reason actor Edward G. Robinson’s aged character Sol Roth, came to mind. The film was Soylent Green, a 1973 futuristic drama loosely based on HarryHarrison’s novel Make Room! Make Room! It also starred a typically unwavering Charlton Heston as a police detective investigating the murder of a CEO with links to the world’s chief food supply. 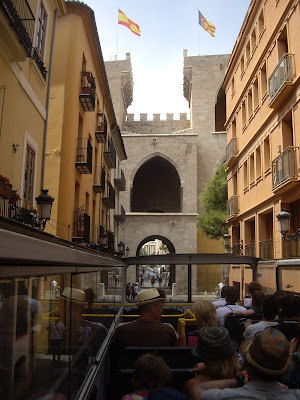 A forebodingly pessimistic film set in New York City in the year 2022, the world is suffering from all those ills - increased temperatures, dying oceans, pollution, overpopulation and depleted resources - foreseen by scientists as early as the 19th century. With only the rich having access to what was once ‘real’ food,  much of the population relies on processed rations for its existence, among them  a “high-energy” wafer containing plankton from the world’s oceans, ‘Soylent Green’.
To Sol’s chagrin, he learns from the Soylent Corporation’s oceanographic reports that its latest product is not made from plankton at all, rather from human corpses.  Unable to endure any longer in a world that has turned to cannibalism, he opts for assisted suicide at a government clinic for mass euthanasia. Lying peacefully on his bed, he slowly dies while being shown widescreen pictures of an Earth that used to be.
Of course it wouldn’t be Chuck if his character went out in a similar vein. Learning the secret of Soylent Green from his dying friend, he infiltrates the corporation's fortress-like facility to find out for himself just how swiftly a corpse can be processed into a tiny, thin wafer. Fighting off the bad guys, he is seriously wounded but not before revealing his dark secret, to the police and some bystanders, that “Soylent Green is people!” 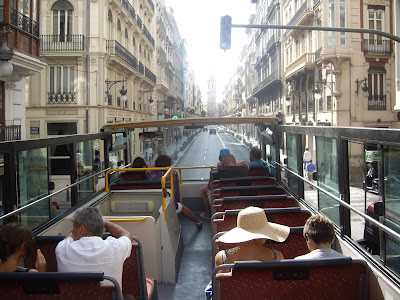 Regardless of its dated appearance, Soylent Green, like other movies of its genre draws attention to many of the world’s fundamental issues that are even more of a problem today than they were almost half a century ago when the film was made. The developing world in particular, is suffering from overpopulation, which despite declining fertility rates, is expected to continue rising until 2050. Meanwhile, global food supplies, which are already being propped up by the US and other major food-exporting countries, have not matched consumption rates for more than a decade.
As economies have grown, particularly in China and other countries in Southeast Asia, the demand for resources and food in particular, has increased. Like Soylent Green’s New York, people are more likely to be enticed towards already-crowded cities, rather than rural areas which have historically been more self-subsistent. According to UN reports, the demand for food is likely to rise by 70% by 2050, as almost three-quarters 70% of the world’s population will be living an urban areas.
Intensifying the problem even further will be the ever-present threat of climate change. Increased heat, drought and flooding, along with declining water supplies is forecast by experts to impact even more dramatically on future agricultural yields, which at the very least, will continue to drive up food prices. While we in our Western world worry about the volatility of the share market or the price of oil, a hike in the cost of any key food staples, even just wheat or rice, is likely to be more than an encumbrance to the world’s poor who spend a significant amount of their income on just food alone.
Books by Mark Krieger: