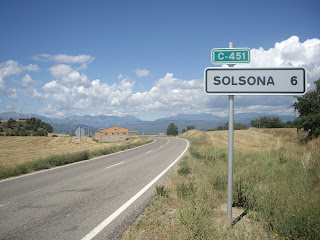 As I rode down the main street of Solivella, I was greeted by Spanish flags along both sides of the road. Like many of the places we’d passed along the way, the tiny village was in preparation mode for an upcoming summer fiesta. Whether celebrating their saints, their loss of liberty (in 1714), their love of the sea, or just life in general, Catalonia is renowned for its festivals.

Like Solsona’s Hanging of the Donkey, Catalans get up to a variety of theatrics during this time of year.  Many include the use of fire, notably fireworks-spitting creatures, ‘correfocs’, that dart through the crowded streets to the beat of drums. Others involve giants, sporting papier-mache heads and dressed in medieval costume, or human towers, ‘castelleres’, up to 10 people high. 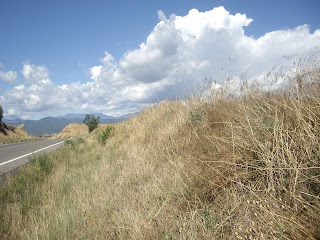 Perchance, I could look forward to some of these imaginings later that evening, but it was the horizontal shape of the flags that gained my immediate attention. It was as if they’d been soaked in starch and left to harden for the winter. With less than a handful of kilometres to travel, the sheer force of the wind, this time blowing my way, was a subtle reminder that cycling around the Iberian Peninsula, for all its splendour, had at times been a taxing experience; one of wind, constant mountains, barren landscape and an unremitting heat that takes its toll on mind and body.
Spending so much time in a furnace that is Spain’s South, I came to accept that each day would be one of blistering heat. On the ‘cooler’ days, the sun’s rays still managed to stoke up the atmosphere, and even when it didn’t, the tired landscape, perpetually sucked dry, would make you feel as though it had. Although still warm to hot, Catalonia’s more modest climate was a different matter altogether.
The vista from the summit above each broad valley was imposing. It reminded me of cycling through the Cantabrian Mountains and the Picos de Europa National Park. Hilltop castles and church spires stood reverently in the distance, a carpet of green laid out for kilometres, below their feet. I was travelling through the Conca de Barberà, a traditional white wine region, sprinkled with medieval villages and Christian monasteries.  Protected in high mountain valleys, through which flow the Rios Francoli and ď Anguera, the region most likely began producing wine around Roman times. Following a lull during Moorish domination, wine production gained impetus during the middle ages when the monasteries began growing their own grapes. By the18th century, wines and spirits were being exported to wider Europe and the Americas.
And then along came the phylloxera virus. Difficult to spell and even more difficult to cure, the virus is caused by tiny sap-sucking insects that feed off the roots and leaves of grapevines. Originating in the United States, the only solution was to start all over again by grafting phylloxera resistant rootstock from American vine species that had developed a resistance over time. With the virus eradicated by the beginning of the 20th century, following the replanting of all vineyards in the Conca area, the first cooperative winery in Spain was built in the town of Barberà.