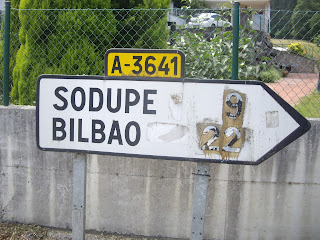 Despite the effortless descent early next morning, it wasn’t long before I was wishing myself back on Earth’s less inhabited neighbour, Elgeta. Like a difficult to treat epidemic, the uncomplicated N-634 became contaminated by traffic spewing out from the busy autovia close by. The more I saw road signs leading towards Bilbao, one of the most heavily populated metropolitan areas in northern Spain, the more my map became a veritable jigsaw of pieces that no longer made sense. The town of Amorebieta-Etxano soon became one of those pieces.  Not easy to spell, and infuriatingly difficult to navigate your way out of, it seemed that even its inhabitants knew of no other road than the bicycle unfriendly AP-68. 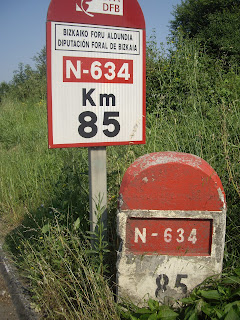 Among the many I approached were two road workers somewhere along the edge of town. Which edge I had no idea. Besides the tops of their heads and the mounds of earth that were slowly building around the crater they were in, you wouldn’t have known that they were even there. Belying their tired and disinterested looks, they appeared otherwise happy to have a reason to take them away from their work. Perfect, I thought, being road workers they’d be experts when it comes to the networks of roads in the region. All I need is for them to direct me to the one which will eventually take me to Llodio, a place not far from here.

Showing far more enthusiasm than I expected, one of the men excitedly climbed out of the hole and gestured for me to head back, a mere 300 metres, in the direction I’d just come from, before taking the first road on my right. This, he said assuredly, would quickly get me back on my way.

As easy as it sounded, I somehow sensed that it was not the precise information I needed. Judging from my map, it was sending me off in an entirely opposite direction and one I’d almost worn my tyres out on already. Probably noticing the unconvinced look on my face, the man glanced at his partner; I guessed for some sort of affirmation. Needless to say, none was forthcoming, none I especially wanted to hear anyway.

Bemused, I stood patiently awaiting the outcome of the two men’s rapid-fire conversation. The only thing that held me there was the thought of not showing my gratitude given the time they’d already spent trying to help me. Apart from providing them with a long break from the pain and sweat of digging their hole, one they hadn’t yet finished, their discussion seemed to accomplish nothing more than a vehicle for proving to each other who of them was right.

As it turned out, it was neither.

With my head still spinning from the heat, my inability to find the right road and the plethora of Basque words I didn’t understand – and that was almost all of them – I decided to continue along the road I was on in the hope of at least coming to an intersection I could recognise on my map. That’s when I caught up with another cyclist. An American from Nevada, who called himself ‘Lance’, his bicycle was laden with more equipment than you’d see at a camping expo. With every turn of the pedal, his wobbly load reminded me of one of those old Hollywood movies where wagon trains beat a slow and weary path across America’s Mid-West. 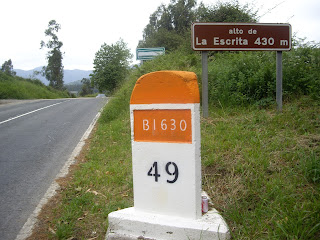 Never happier to hear an English speaking voice, even an American one, it turned out he was heading in the same direction as me, towards Llodio. Sporting a stockpile of maps that could have easily doubled as a pillow, should he need one, he conveniently pulled over by the side of the road to help allay my fears. From then on, it became a simple matter of patiently following my new luggage-toting acquaintance for the rest of the way. 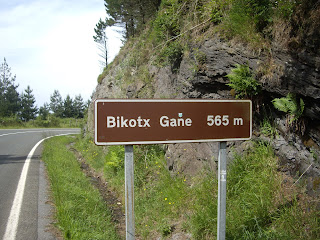 Travelling slowly, we had time enough to exchange a few experiences. Even between strangers, there’s always something to talk about when it comes to touring and bikes. Be it where you’ve been, where you’re heading, for how long, the roads, how your bike’s travelling or gear ratios, the conversation always seems to flow easily. Fast approaching the urban sprawl along the edge of town, we finally wished each other farewell. I continued west towards our overnight stay in the small village of Rasines, while he was spending the next couple of nights in Llodio, before finishing his three-week journey - from Madrid - in Santander, along Spain’s northern coast.
Books by Mark Krieger: