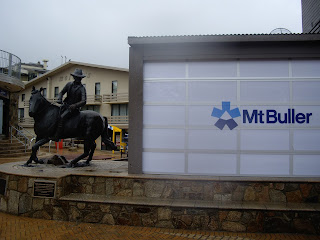 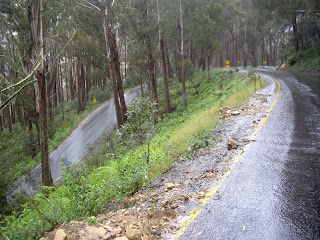 Little more than a three-hour drive from Melbourne, Mount Buller is one of the most scenic climbs in the Victorian Alps. Its 4% average gradient mightn't sound like much on paper but it’s its final 16 kilometres that make this climb what it is. Heading west from Mansfield along the C320, the road winds gently through rolling hills until it reaches the tollgate at the tiny township of Mirimbah.
Beyond Mirimbah the road steeply rises, maintaining a steady gradient of around 6% for the next 6 kilometres. Similarly to the Col d’Aubisque and many of the other well-known climbs in the French Pyrenees, the road up Mount Buller is signposted all the way to its summit. 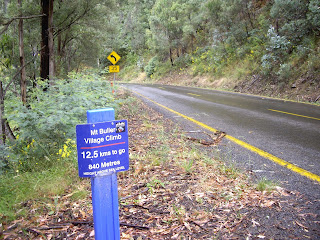 Over the next 8 kilometres the road winds sporadically through verdant eucalypt forest. You’re now amidst what is probably the best part of the ride; a combination of steep gradients and brief flat sections of road that timely reappear just when you need them most. If Mount Buller takes you out of your comfort zone, then it’s only its last 1.6 kilometres up to the alpine village. Typically, the tree line all but disappears, soon to be replaced by seasonally jam-packed chalets and ski lifts. 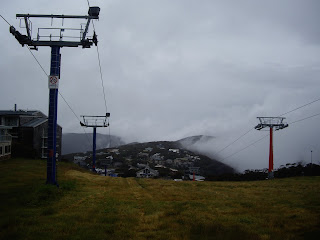 Destination Arlberg (the hotel at the very top of the village), is your final objective. Most likely unprepared for the 10% ramp still to come, you slowly edge your way around the aptly named ‘Hell Corner’, the steepest section of the climb.
Perhaps not quite as tough as its counterpart 50 kilometres to the northeast, (you’ll read about this climb in my next blog), its beauty, its intermittent steepness and its teasing approach to the top, would easily rank Buller’s Tourist Road with many of the climbs in the three European grand tours.
For difficulty and character, I’d compare it with Hautacam in the French Pyrenees; it’s just slightly less steep overall. Not forgetting that the road up to the French ski-station is a Hors Categorie climb.


..........Before dinner and an evening stroll I did the climb up to the ski resort of Hautacam. Another peak situated close to the foot of Argelès-Gazost, it’s a 17-kilometre ride averaging 6.8%. While veiled in mist at the 1,635 metre summit, the conditions for climbing seemed perfect from down below. The early part of the climb took me through three small hamlets. As I passed through each one, I had the distinct feeling that I’d seen them before. It was obviously on one of those intimate television coverages of the Tour de France, where cameras probe deeper than a colonoscopy. Nevertheless, seeing them first-hand felt a little bizarre, even surreal. 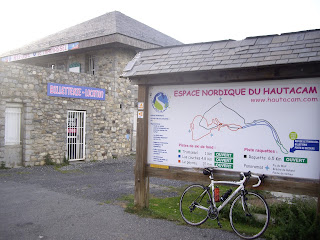 The gradient was relatively easy for most of the way, except for a 3-kilometre section averaging around 9%. I felt confident that nothing would stop me in my tracks, even as the road became more slippery the higher I travelled. Despite the thick veil of mist still hovering around the summit, I passed plenty of riders coming down. I also passed Roz, who was on foot. She’d parked the car about 2 kilometres from the top, deciding to walk up the rest of the way. Of the riders I passed, not many bothered to respond to my enthusiastic “Bonjour”, which was a little disheartening. After all, they were descending while I was climbing. Admittedly, you can’t stop to get off your bike to shake hands and hug every rider you pass, but there should be a little camaraderie between cyclists. A simple nod of the head, as some riders do, is enough to acknowledge that we all share the same roads, mountains and love of movement on a bike. 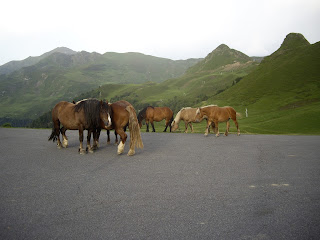 As I came closer to the top I was riding over graffiti-covered road. It was a tribute to some of the famous Tour riders, who had their names emblazoned all over the bitumen. Occasionally the site of a stage finish, I could only imagine the frenetic pace generated by the race leaders as they sprinted to the finish line. In the mist it might have been something akin to Andy Schleck and Alberto Contador’s famous seesawing duel up the Col du Tourmalet in 2010.
But unlike the Alto de l’Angliru, the final kilometre up Hautacam seemed relatively easy. In my mind, what distinguishes the Spanish mountain, and the other great climbs, like Austria’s Grossglockner and the Cime de la Bonette, are the killer gradients towards the top. Going above 16%—and 20% in the case of Angliru—at the end of a long day’s climb is physical and mental torture, only too well reinforced by David Millar’s dummy spit back in 2002. 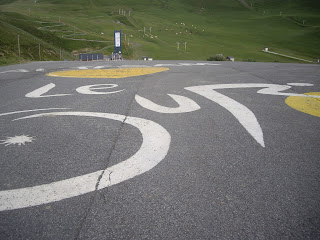 The top of the mountain was like the inside of a car with a broken demister on a fearfully wet day. Visibility was zilch. Apart from the lone sign which told me I was at the summit, there was absolutely nothing to see but flat bitumen and grass edges, all camouflaged in thick mist. It was as if I’d stepped onto the set of a Hammer House of Horror movie, where some hapless and defenseless large-breasted young woman is eventually done away with in the London brume. Ironically, when I missed seeing Roz up the top, it crossed my mind that perhaps she’d won a starring role in one of those Hammer films. It wasn’t until a few hundred metres into my descent that I could make out the sight of a lone figure striding down the mountain. It was Roz. After all, who else would be crazy enough to be up there on foot?
Coming down was half pleasure, half pain. The road was still shrouded in fog, and if anything it was getting colder. Suddenly I was forced to come to a screeching halt at the sight of cattle, about 40 head, being herded across the road. Like the motorist coming the other way, I had to wait until the very last cow had meandered its way, ever so slowly, across to the other side, swatting its tail and giving me a disdainful sideways glance. That’s the Pyrenees for you, I thought. Just the same, despite sighting the odd kangaroo and the occasional echidna excavating by the side of the road, I’m looking forward to the day we get cows, sheep or goats up on Arthurs..........
Books by Mark Krieger:


“It is by riding a bicycle that you learn the contours of a country best, since you have to sweat up the hills and coast down them.”
Ernest Hemingway