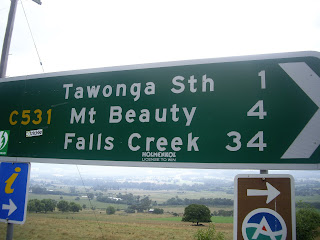 
Not my favourite Alpine ride, but formidable just the same, Falls Creek is another of the many climbs close to the Victorian township of Bright. About a four hour drive from Melbourne, it’s a 33 kilometre ride from Mount Beauty, or if you’re really keen and with time to spare, a much longer return trip via Tawonga Gap. The heat is always a factor throughout the summer months, but in cooler conditions, you might just realise that you’re witnessing some of the most breathtaking scenery in the Australian Alps. 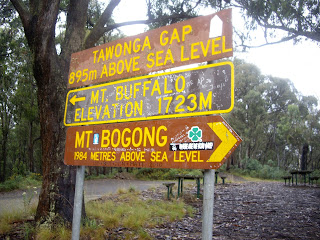 Unlike Mount Buffalo, which stays true to its 5% gradient for most of its 25 kilometres, the climb up to Falls Creek Ski Resort is far more undulating. After the four kilometre climb out of Mount Beauty, the C531 road becomes a scenic railway of ups and downs, virtually all the way until it reaches the bridge over the East Kiewa River, just 14 kilometres from the summit.
Approximately two kilometres before the bridge is Bogong Alpine Village, which marks the half-way point of the climb. With magnificent views of Lake Guy and surrounded by National Park, you could well argue that there’s more reason to stay overnight in one of the village’s holiday cottages than continuing on up the mountain. Especially, as from here, it’s all about altitude gain.
Clearly the most difficult section of the climb, the gradient hovers between 4 and 6%, seemingly easy but the combination of heat and the distance already travelled, contrive to make the journey much harder.
Like longing for minutes to tick by before a long weekend, the road’s familiar landmarks are slowly passed, one by one; first the distant view of Mount McKay, then just six kilometres from the summit, the sweeping left-hand hairpin and the immediate rise in gradient that goes with it.
With the increasing gradient, the eucalypts begin to disappear, only to be replaced by stunted snow gums and torturous glimpses of Falls Creek two kilometres further up the road. Winding its way painstakingly along the ridge, the climb finally finishes, for most cyclists, at the Gateway Café, or if you’re determined to make it to the very top, the real summit just 400 metres up ahead.

Like Falls Creek, the final few kilometres up the Col du Glandon are steeper again. At the top, there's no café to greet you, no ski chalets, just a desolate wilderness. From here the road turns right. Two kilometres later you're rolling over the summit of the Col de la Croix de Fer.

“When man invented the bicycle he reached the peak of his attainments. Here was a machine of precision and balance for the convenience of man.”