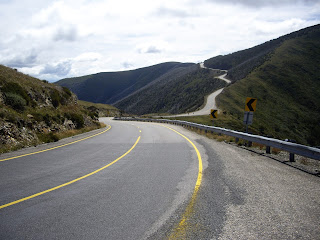 One of only two Hors Categorie climbs in the Victorian Alps, the ride up Mount Hotham is as good as it gets. Beginning from the quiet valley town of Harrietville, just 23 leisurely kilometres from Bright, it's renowned for its steep gradients and magnificent scenery.

﻿
Of all the mountain roads along Australia's Great Dividing Range, Mount Hotham is the one most like the 'big' climbs  in the French Alps. With its breathtaking views, denuded landscape and its sweeping steep approach towards the top, you could be forgiven for thinking that you're on the D65 in Southern France,  wending your way up the Cime de la Bonette.

﻿
﻿
Almost from the moment you pass the Harrietville pub, opposite the caravan park at the end of town, you'll know well and truly that you've already begun the climb up Mount Hotham. With a sharp left-hand turn you begin climbing steeply at around 7%. The end of five kilometres of alternating gradients and meandering road marks the beginning of the climb's steepest gradient so far. Known as 'The Meg', it's a relatively short pinch, probably only about 300 to 400 metres, but at 10%, it provides a small taste of what the mountain has in store later on in the  ride.
Like a vociferous spectator who  realises he's raised his voice too high, the gradient quickly slackens off and is soon replaced by a comfortable 9 kilometres of false-flat. Now asking yourself the question, How can this be a Hors Categorie climb?, the next 30 minutes of the ride is one of rolling bends and intermittent views across to the summit.


Buckland Gate and CRB Hill are to Hotham what Bogong Village is to Falls Creek and Mirimbah is to Buller; forewarning signs that things are about to change. With one-third of the 30 kilometre climb still remaining, all that doubt about Hotham being a bit overrated is quickly forgotten. No sooner have you passed the gate that the road sweeps up and takes you out of the trees and into another world altogether.
This could be the French Alps, I told myself the first time I arrived at this point. When I finally got over there just two years later, I found out I was right.

Following the steep descent and the arrival of CRB Hill, the gradient goes up another notch (10% for about a kilometre), and then down again. Just an entrée before the main meal arrives, the narrow road, with its teasing lacets, hovers above in the distance.


Fitting of the last two kilometres of a Mont Ventoux or a Col du Tourmalet, you're not only exposed to the mountain's enduring gradient but the swirling winds. Unlike its two French counterparts, there won't be much atmosphere when you exhaustedly reach the summit, but undeniably, the feeling will be just as good.