Before I start thinking about this year's Giro d'Italia and my favourite Italian climbs - and there are plenty of those to choose from - it's none too soon to get back to finishing my next book, about my cycling journey around the Iberian Peninsula. My next few blogs therefore, will be excerpts about some of our travels through northern Portugal. Colourful, loaded with history and hugely underrated, its a great place to visit.
*     *     *
Now entrenched in Portugal’s North, I took a day off from cycling to pick up Emma from Porto Airport. Never having visited Portugal before, she was looking forward to tagging along with us until we returned back over the border into Spain. 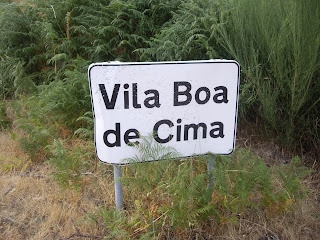 Leaving early next morning, I was soon travelling with ease along the N106 towards Penafiel. With few bends and carrying little traffic it was one of those stretches of road that seem to carry you without time nor effort.

Then, just like a sudden dose of bad weather, the traffic conditions changed, and so too the gradient. Although it was nothing I hadn’t encountered before, it turned out to be a precursor to a very frustrating afternoon, and evening, to come. It wasn’t the busy traffic, or the heat, or bicycle problems. It wasn’t even the cobblestones through the town of Cinfães that felt like cycling along the rutted tracks of northern France.


Neither Roz nor I paid much attention to terms like ‘commune’ and ‘municipality’ when it came to planning our accommodation in Europe. Inherently generic, they seem irrelevant compared with words like ‘village’ or ‘town’ which provides a more accurate account of a particular location’s whereabouts.
As for our accommodation in Cinfães that evening, just about all the sites we visited seemed to echo the same sentiment; that is it’s a small village containing little more than 3,000 inhabitants, who reside in a municipality of almost seven times its size. So as you now may have guessed, gliding free and easy up and down the village’s one main road, expecting to stumble upon our accommodation at any minute, I was ensconced in a ‘neighbourhood’ spanning almost 250 square kilometres. The problem was, I just didn’t know it yet. 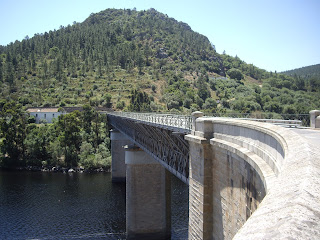 The rest of the afternoon became a revolving door of dead-end streets and confusing directions that despite the best of intentions, came to no avail. It reminded me of the time in Tuscany when Roz and I arrived at a house we’d booked on an internet site. According to the normally reliable Google Maps, this was the place, but the bemused look on the faces of the couple who lived there suggested otherwise. Obviously not the first overseas tourists who’d turned up on their doorstep, we were treated with more hospitality – lunch, served with warm conversation and a local white wine – than we were likely receive at our real destination; if and when we eventually found it. We ultimately did, but not before travelling many more kilometres than you’d care to ride on a bicycle.
Tormented by the stifling heat and worse still, the feeling of incarceration, I stopped outside a camping shop at the far end of the village. About to close its doors for the day, a young guy was bringing in the last of the odds and end still out on the pavement.


Resigned to the possibility that the place I’d been searching for didn’t even exist, or at best, was a long distance away, I wearily asked him if he’d heard of the Casa da Geada.  And better still, did he know how to find it.
In what was the first piece of good news since starting out on the N106 some six hours earlier, he at least reassured me that our overnight accommodation was for real. Evidently snug in a high mountain forest, some 20 kilometres to the north, it would involve an hour or two of steady climbing; providing of course, that I took the right road. Studying the maze of wiggling lines on my map, that was by no means fait accompli. 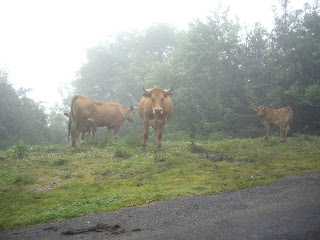 Bounded by three major rivers, the Douro to the north, the Paiva to the west and the Cabrum in the east, it’s hardly surprising that the municipality of Cinfães is one of the most mountainous areas in Portugal. At its southern margin is the Serra de Montemuro, home to many villages scattered throughout a vast network of hills and valleys. Almost 1,400 metres at its highest point, and averaging more than 800 metres throughout the entire range, it’s quite common for roads to reach gradients above 15%. The thin and winding stretch of bitumen I found myself on, the CM1027, was unmistakably one of these.
More anxious about misinterpreting the directions I was given than the steep terrain, I pulled into the front yard of a small house. One of only a handful straddled along the high side of the road, three people were seated around a table outdoors, finishing off their dinner. A couple and their young teenage daughter, the rather bemused looks on their faces suggested that it wasn’t the first time that a stranger had suddenly appeared on their front doorstep. 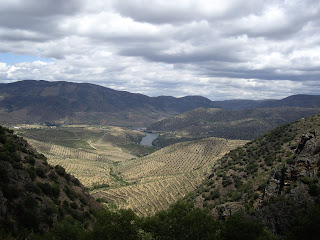 Fairly proficient speakers of English, they reassured me that I was heading on the right road and despite the climbing still ahead, I didn’t have too far left to travel. Despite the lateness of the day, they insisted I stay a little longer and share a drink with them while I told them about some of the experiences we’d had so far. Typical of so many people we’d met on our journeys through Europe, they were desperate to help and in the process, learn more about who we were and why we were so willing to visit such a small out-of-the-way place as theirs. The answer, of course, was simple. “I love visiting different countries; and what better way to truly see them than on the seat of a bicycle”.
On the home stretch towards Casa da Geada, I began pondering over some of the things I brought up about our experiences so far. Their questions, and my anecdotes in response, were all about what I’d done on my bicycle; the mountains I’d climbed, the close shaves I’d had, my experiences of getting lost and of course, about the wonderful places I’d travelled through along the way.


But gnawing at me during the rest of the ride that evening, was something I’d neglected to say, something far more enduring in relation to why it’s healthy to travel.   While the rumbling voice of history, religion, and jingoism still conspire to divide us, the more we learn about other people’s cultures and differences, the more we realise just how similar to everyone else we really are. That was something we truly could have toasted.