My Ten Most Difficult Australian Climbs - The Hardest (By Far): Mount Baw Baw 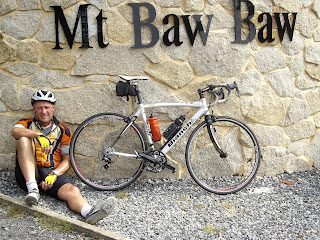 Though dwarfed by many of the world’s mammoth mountain chains, like the European Alps, the Rocky Mountains, the Andes, and above all, the Himalayas, Australia’s ‘Great Divide’ still has its fair share of challenging terrain and impressive peaks. Quite astonishingly, it’s the world’s fourth largest mountain range. It also has its long and lonely winding roads, which to the cyclist, present every bit as much of a challenge as their overseas equivalents.
Despite its diminutive length, there aren’t many more punishing climbs than Mount Baw Baw.  More renowned for its skiers and snow boarders who converge on the mountain’s slopes during winter, Baw Baw, in cycling terms, is ranked by some, as the world’s second steepest bitumen road climb. Little wonder why. Classified as a Hors Categorie climb-the hardest of the few in Australia-it has an average gradient of 13%.
While only just above 6 kilometres in length, Baw Baw offers no respite whatsoever to the suffering cyclist, except for a paltry 50 metres at 4%. A ladder of sheer unadulterated pain, it is often compared to the second half of Spain’s most brutal climb, the Alto de l’Angliru. And with good reason. Over the final 6 kilometres, both share virtually identical average gradients while each of their maximum gradients reach above a very nasty 20%. Interestingly, few of the Hors Categorie climbs in the Tour de France or the Giro d’Italia get anywhere near the average gradient of either of these monsters.
*     *     *
Up until recently, I’d only ever climbed Mount Baw Baw the easy way - if there is an easy way.  That is from Tanjil Bren, which is a near-10 kilometre ‘stroll’ - by comparison to the climb itself.
I’d always wanted to ride the 80-plus kilometres from Yarra Junction to the Gantry before attempting the climb. In my younger days I’d spent a lot of weekends and holidays walking through significant parts of the route which follows the Latrobe River for more than half its distance.
The sleepy settlement of Powelltown, 15 kilometres along the C425, became a regular destination, when as a teacher I would take students on hiking camps. Not overly long - less than 40 kilometres - and taking you through tall forest abundant in mountain ash (Eucalyptus regnans), the tracks followed the network of tramways built in the early 1900’s which opened up the area for logging. Not overly difficult - though some would say carrying a 25 kilogram pack on you back is difficult no matter where you take it – it provided a perfect location to introduce young secondary school students (some no older than 12 or 13) to bushwalking. 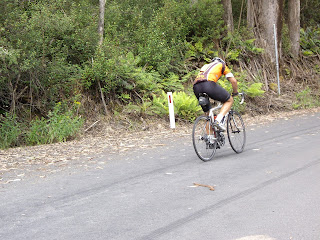 While the majority of tramways followed the gentle lie of the land, I’ll forever remember the one really tough section of the walk. It was up the High Lead incline to the site of the winch station on top of Dowey Spur.  It wasn’t much over 1,500 metres in length but its average gradient was almost 25%. Resembling poor souls defeated in battle – made more graphic by the accompanying denuded and charcoaled vegetation destroyed by the 1983 Ash Wednesday fires - the collective sight of Year 7 students slowly trudging their way up the steep slope in front of them was harder to endure than the climb itself. It would have undoubtedly been the most gruelling physical challenge they’d been confronted with in their short lives to date.
*     *     *
With the exception of the odd logging truck and midweek sightseer, the ride towards of the climb is as peaceful as it gets. It’s well worth the three to four hours it takes to get there. Once past Noojee, the road steadily climbs towards the sleepy town of Tanjil Bren. Formerly a popular destination for prospectors trying to make their fortune during the Victorian Gold Rush, the town today, consists of little more than a general store – open during ski seasons – two lodges and approximately 100 local inhabitants. Its quiet solitude has a sense of foreboding about it for like the climb itself there’s not much company around.
That’s another unique feature about climbing up Baw Baw. Unlike many of the ‘commercial’ climbs overseas, it’s long and lonely approach to the base of the climb is only for diehards, while apart from the odd cycling event, there is no sense of fanfare for having reached the top. Just personal satisfaction.
Once past the gatehouse, the next 6-plus kilometres hover around the road’s 13% average gradient for almost the entire climb. But it’s the 500 metre-plus section of road at Neulynes Hill, that is most memorable. All for the wrong reasons. While my own speedometer doesn’t change much between five and seven kilometres along this very nasty stretch, it’s where you’ll see struggling cyclists - should you have the inclination to look – painfully zig-zagging their way up the dead-straight road.
Your only recompense for the rest of the way is that longed for 50 metre bend at 4% and a slightly flatter road over the last few hundred metres.  The series of car parks and ski lodges herald the welcoming news that the end is nigh.
Mount Baw Baw Alpine Resort is approximately 150 kilometres (or a sub three-hour drive) from Melbourne. It can be reached by taking the Princes Highway (M1), via Pakenham, or the Maroondah and Warburton Highways, before heading east along the Yarra Junction-Noojee Road.
Books by Mark Krieger: