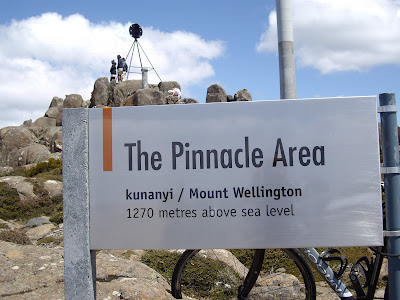 Leaving from Hobart docks, Mount Wellington is the most formidable and well-known climb in Tasmania. Its 5.9% average gradient, no pushover in its own right, belies just how difficult it really is. 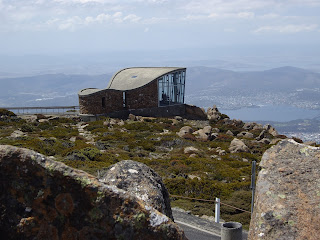 I’ve heard it said that there are a number of similarities between the Tasmanian mountain and France’s Mont Ventoux. Both have long, straight stretches of road (rather than an abundance of switchbacks), both have antennas on their summit and both provide the cyclist with a mighty view of what’s in store almost before the first turn of a crank.


Finding your way up Mount Wellington isn’t difficult; as I’ve said, just the climb itself. In less than 2 kilometres, Davey Street (adjacent to the docks) becomes the Huon Highway, the B64, which in turn becomes the C616. After that, the next 18 kilometres or so is all about verdant eucalypt forest, steep gradients and magnificent views, especially at the pinnacle. 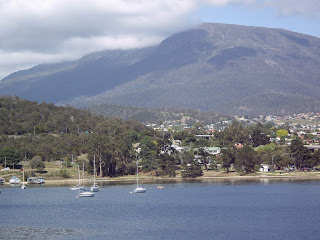 A climb of two halves, the initial 8 kilometres of road is rather innocuous; averaging less than 2%. A sharp turn-off at Fern Tree, sees the gradient rise drastically, and with few exceptions, that’s the way it stays until you reach the summit.


Like most high mountains, even Australian ones, the tree line gradually disappears, only to be replaced by rugged landscape, gusty winds and the now-familiar views of the open road up ahead. Eventually, still 4 kilometres from the Pinnacle, the road winds back upon itself. You’re now climbing at a near-7% gradient and the mountain’s antennas are still not quite within your reach.


With a little imagination, you might just be approaching the summit of that iconic climb in northern Provence!


* * * * * * *
Originally called ‘Table Mountain’, Mount Wellington was named in honour of the Duke of Wellington, who with the help of the Prussian General, Gebhard Leberecht von Blücher, defeated Napoleon at the Battle of Waterloo. (A lover of history and travel, not just cycling, you may be interested in the following excerpt from my book).


……The Battle of Waterloo has always fascinated me. It’s regarded as one of the greatest battles in European history, marking the final confrontation between France and the rest of Europe. Its outcome put the final nail in Napoleon’s proverbial coffin and paved the way for a more lasting peace. The battle certainly captured my imagination as a Year 11 student, the moment the opening credits of Sergei Bondarchuk’s 1970 film, aptly named Waterloo, started rolling. Ever since, I’ve imagined Rod Steiger to be a far more believable Napoleon than the “Little General” himself. 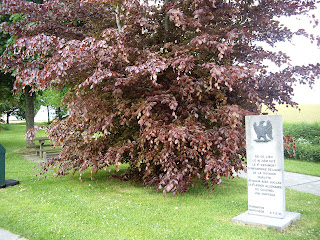 So while retracing our steps all the way back to Charleville-Mézières we made a point of visiting Wellington’s Butte. It’s a rather big mound with the statue of a lion on top. Literally named the “Lion’s Mound”, or “Butte du Lion”, it stands on the spot where the Prince of Orange got socked off his horse by a musket ball. Poor bastard. It’s also dedicated to the 50,000-plus casualties of the battle, of whom almost half were French.
One of the most tantalising aspects of the battle is how close Napoleon actually came to winning. Even Wellington himself is supposed to have said of the victory, “It’s the nearest run thing you ever saw in your life . . . By God!”
Human error certainly played a part in Napoleon’s ultimate defeat. To start with, he deployed one third of his army, under General Grouchy, to pursue the Prussians as they retreated after being defeated two days earlier at the Battle of Ligny. Grouchy made a sloppy job of it, allowing the Prussians time to regroup and failing to keep them separated from the rest of the Allies. As a result, by late afternoon on the day of the decisive battle, the French were gradually outflanked by Prussian reinforcements coming in from the east.


The irony is that General Grouchy, still following his orders, defeated a significant part of the Prussian army the next day at Wavre. However, all that did was deprive Napoleon of 33,000 French troops at the Waterloo battlefield.
During a critical stage in the battle, Napoleon’s Marshal Ney impetuously led a cavalry charge on Wellington’s right flank. It sounds feasible enough. Only problem was, it was unsupported by infantry and artillery. More charges followed in the next two hours, but they ultimately proved fruitless and resulted in heavy losses.


Then there was just bad luck. The downpour of rain the night before the battle played a part, causing Napoleon to postpone the main attack so the ground could dry out. Basically, the muddier the ground, the slower the French advance became. Had Napoleon been able to attack earlier, the Prussians’ support late in the day may never have been a factor.
And finally, there was Hougoumont.


Varying sources suggest that the battle of Waterloo began sometime between 11.00 am and 11.30 am, with an attack on the Château d’Hougoumont. As well as the chateau itself, Hougoumont comprised a number of smaller buildings, including two other houses, granaries, barns and even a chapel. Hidden by dense woodland, its entire grounds were surrounded by an escarpment. Fortified and garrisoned, it held strategic importance in protecting Wellington’s western flank.
The French came closest to seizing Hougoumont during the early stages of the battle. Had they done so, its final outcome may have been different. Though the chateau and its surroundings were well defended, French soldiers almost succeeded in penetrating its main gate. A bitter struggle ensued, with British guardsmen trying to shut the gate while the French desperately tried to force it open. Finally, a party of British officers and sergeants, led by Lieutenant-Colonel Macdonnell, succeeded in forcing the gate shut. A corporal, later promoted to Sergeant, James Graham of the Coldstream Guards, the oldest serving regular regiment in the British Army, is credited with being the one who put the bar in place.
While bitter fighting continued around Hougoumont all afternoon, it was to remain firmly in Wellington’s hands throughout the remainder of the battle. Napoleon had invested approximately 14,000 of his entire force in trying to take the strategic manor house. Had he succeeded, he would have held a huge advantage over Wellington’s vulnerable flank, and in all probability, would have won the day. Instead, he was deprived of the numbers he needed to force the Allied centre and help delay the imminent return of Blücher’s Prussians, who were fast approaching by late afternoon.
It is said that Wellington later stated that, “The success of the battle turned upon the closing of the gates at Hougoumont.” Gerry, a former history lecturer I met in England, had his own theory of the tiny battle within a battle. A passionate student and believer in the notion that inconspicuous actions can result in sizeable consequences, he quoted me the nursery rhyme that probably had its origins deep in English history:


Lycra, Lattes and the Long way Round
Books by Mark Krieger:


“Nothing compares to the simple pleasure of riding a bike”.