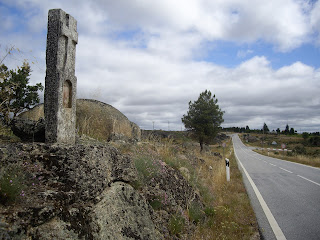 While I had my own cycling tribulations to deal with, Roz and Emma, who were also heading to Cinfães, in our hired Fiat Panda, didn’t fare much better. Following lunch in a cosy little café along the town’s main strip, Roz called in to a petrol station to ask for directions on how to get to the Casa da Geada. Convinced, as I was, that our accommodation was located down a side street somewhere close by, her concerns were more about how they’d spend their afternoon whiling away the time.

Different from the route given to me, the man at the petrol station quickly drew a map, instructing the pair to backtrack over the Rio Bestança via the N222, before taking the CM1027-1. Smiling, as he handed Roz the flimsy piece of paper covered in wriggling lines and five-digit road numbers, “It’s not much more than 20 kilometres”. Probably noticing by her surprised look that she didn’t suspect the accommodation to be so far away from the town itself, he didn’t mention anything about the condition of the road. Roz later wondered why.  Perhaps he thought if I knew, I’d be too scared to venture up there in the first place. As it turned out, he may have been right. 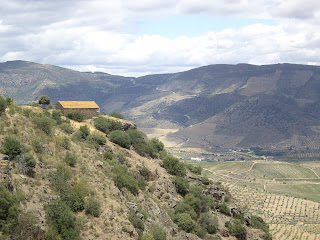 Narrow, winding and dreadfully steep, no sooner had the tiny Fiat started up the mountain that its engine began to stall. Only half a breath away from a state of panic, Roz pulled on the hand break in a forlorn attempt to stop the heavily laden car from rolling backwards down the road.

With gravel lining the edges and the forest providing little comfort from the view of the precipitous valley below, she was somehow able to guide the car into a vacant driveway.

With not a soul in sight, just the sound of barking dogs, Casa da Geada felt light years away. Relieved just to be out of the car, they felt, at least for the time being, that they could do no better than patiently wait until someone appeared.

Thankfully, after a few moments, someone did. It was a woman who lived in the house. Having pacified her dogs, the elderly lady, perhaps somewhere in her late sixties, appeared at the door with a rather worried look on her face.  Able to speak broken English, she understood Roz’s predicament; though she was seemingly at pains with what to do about it. 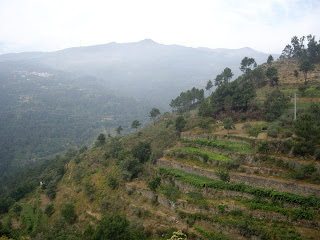 With Roz almost at the point of backtracking down the mountain and attempting it from the other side, the woman had an idea. She rang her friend. No sooner had she put down the phone did they hear the sound of an engine reverberating up the mountain. Obviously an intelligent sort of guy, he got around on a motorcycle, a far more practical means of travel in this kind of terrain.

Showing little salutation and even fewer words, the young biker was clearly a man of action. After examining the engine and making a few minor adjustments to the carburetor, the coughs and splutters that portended the stalling of the car, were no longer evident. 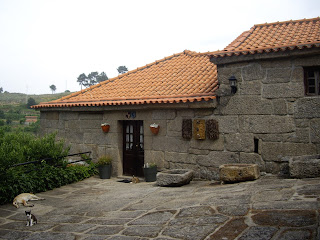 Not convinced that the car wouldn’t stall again, Roz sat uneasily behind the wheel waiting to see what might happen next. Then, without a word, just a wave of the hand, the motorcyclist gestured for her to follow him up the mountain. Despite the steep gradient and the winding road, the speed with which he travelled gave her little time to think about the state of the car, the terrain and anything else that could possibly go wrong. Twenty minutes later, a fork in the road heralded a 300-metre descent to Portugal’ version of Plato’s Atlantis, Casa da Geada.

A phantom, he gave a finger wave towards the entrance to the house, followed by a quick nod of the head.  Lasting just seconds, the only reminder that he existed at all was the trail of smoke behind him.