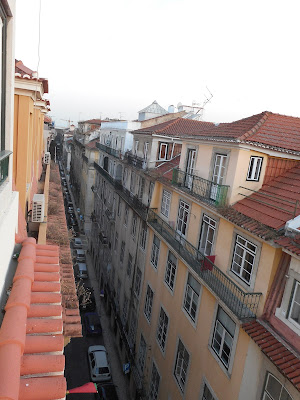 Normally, large cities are rarely at the top our list of places to visit when travelling overseas, certainly when cycling is involved. They’re just too busy. Instead, we prefer to garner a taste of what life is like for people who live in some of the smaller towns and villages around the country. Lisbon, by comparison, less than 90 kilometres from Vendas Novas by car, was just too tempting to pass by unseen.

Far more than sharing the name of a type of lemon, Lisbon is both drenched in history and abundantly alive in the present. Transformed from a medieval town into a more modern architecturally designed metropolis, following the catastrophic earthquake of1755, it is today the 7th most visited city in southern Europe. And it’s not surprising.

Totally rebuilt over the rubble left behind, Lisbon’s Baixa or city centre, is the most popular bairro (district or neighbourhood) amongst tourists. Our accommodation was at the Vistes De Lisboa, a relatively basic but budget-friendly hostel along one of the many avenues that led to some of the most impressive plazas we’d ever seen.

No more memorable was the Praça do Comércio, a vast waterfront square that was once home to the royal palace, before it was destroyed in the earthquake. It was also from here, that traders bought and sold foreign merchandise, including African slaves used as manual labour, chiefly in Portugal’s South, and later in the thriving mining and sugar industries of Brazil.

It was underneath the statue of King Jose I, the Portuguese ruler who presided over the city’s reconstruction, that we met our tour guide, Luis. Not normally enamoured by excursions of any kind, we at best might stand on the periphery, just to listen if the speaker has an American accent or not. But enticed by curiosity, and no less the ‘free’ walking tour advertised in a brochure at our hostel, we were treated to an entertaining and informative sketch of the city’s gateway.

Native Portuguese, Luis spoke passionately about some of the events that helped shape his country, as well as the significant people who drove them along. We weren’t surprised to hear him mention historical moments like Carnation Day (the overthrow of the Estado Novo regime), the Portuguese Inquisition and Prince Henry’s Age of Discovery, but we were enlightened by his story about Dom Pedro I (also known as King Peter), who delivered independence to the former Portuguese colony of Brazil. 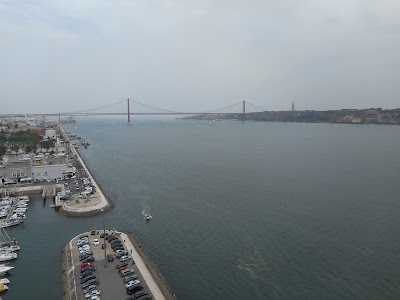 Despite threats from revolutionaries and insubordination from his own troops, he successfully dealt with the Portuguese government’s intention to revoke the political autonomy that Brazil had enjoyed for more than a decade. While not without cost – some 6,000 lives were lost in the 24-month War of Independence that followed – it was not the growing disaffection and protracted series of revolts that occurred in Spanish Mexico for 11 years.

Luis guided us through the Praça do Comércio’s triumphal arch and onto the Rua de Áurea. A popular pedestrian street, its outdoor cafes and long lines of shops looked full to the brim, while street artists and the occasional peddler plied their trade.

Further down the street was one of Lisbon’s most visited landmarks, the Elevador de Santa Justa. The city’s one and only vertical lift, it was built at the turn of the 20th century by Portuguese-born architect Raoul de Mesnier du Ponsard, a former apprentice of Gustave Eiffel.

Fascinated by its neo-Gothic design and the promise of extensive views over the city’s skyline, there were long queues of people patiently waiting their turn. For the cost of 5 euro and what looked like a half-hour wait, we decided instead, to trek up to the Miradouro de NossaSenhora de Monte, for an even more panoramic view, and at no cost.

Though you can travel most of the way up to the lookout via the city’s popular number 28 tram, walking uphill through Alfama’s narrow zigzagging backstreets, seemed more of a relaxing and enriching experience. Virtually untouched by the earthquake, the oldest of all Lisbon’s districts, was seeped in history.