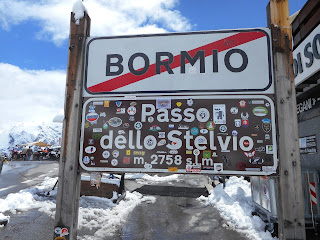 Perhaps not the most difficult climb in Europe but arguably the most magnificent, the Passo dello Stelvio is an iconic Italian landmark. But long before cycling, let alone the Giro d’ Italia, the original road belonged to the Habsburg Empire. Officially opened in 1825, after taking five years to complete, the road crossing was designed to connect the former Austrian province of Lombardia with its Empire to the north. The man responsible for its creation and execution was Carlo Donegani, who in return, was awarded the title of Knight of the Austrian Empire and the arbitrary Nobleman of the Stelvio by the then Emperor Ferdinand – albeit 12 years later.

Before the end of World War I, the top of the pass formed the border between the Austro-Hungarian Empire and the Italian Kingdom. Like other significant ranges, such as the Dolomites and Monte Grappa, the area became a theatre for war, where fierce battles were fought in ice and snow. It wasn’t until Italy’s accession of the region after 1919, that the pass lost its strategic importance. Over the majority of years since however, humans have embarked on more playful pursuits that pay homage to Donegani’s writhing asphalt serpent. 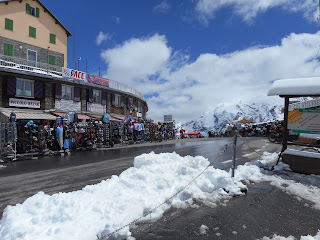 France’s legendary climb, Mont Ventoux (from Bedoin) and Italy’s Stelvio (from Bormio) have two fundamental characteristics in common; they are of a similar distance and have an almost identical average gradient. But that’s where the similarities begin and end. Unlike Ventoux’s virtually lacet-less ascent, Stelvio’s 48 hairpins from its northern side, make it a climbing cyclist’s paradise.

The difficulty of Stelvio lies not with its gradient but its height and length. Not far off 2,800 metres, the diminishing oxygen over its final 7 kilometres makes the two-hour-plus ride an even tougher assignment.

The first Giro encounter to reach the top of the pass was Fausto Coppi in 1953. Making the climb his own, he built a lead of 4 minutes over race leader Hugo Koblet throughout the final 11 kilometres to the summit. 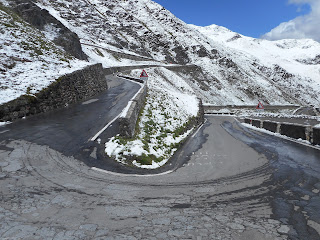 Similarly to Blockhaus, the climb up Stelvio is divided into two halves. Heading up the valley towards Trafoi provides little idea of the terrain, and landscape, of what lies ahead. In fact, the first of its 48 hairpins doesn’t even appear until 8 kilometres into the climb. Five hundred metres from here, where the road leaves the river, the gradient immediately rises to above 7%, and remains so, and even steeper, all the way to the summit.

Frightening, yet awe-inspiring at the same time, there’s nothing left to do but follow the lacets, that like white-coloured rice terraces, gradually wend their way towards the Tibetan hut perched on Stelvio’s summit.


US author and poet Diane Ackerman