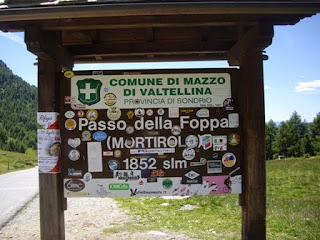 
Like Spain’s Alto del Angliru, the road linking Mazzo di Valtellina with Monno and the Val Camonica started out as little more than a goat track. Less widely known in cycling terms as the Passo della Foppa, it’s one of the most fearsome climbs in the world of cycling. 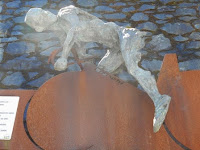 Similarly to other iconic mountain passes, among them Mont Ventoux, Passo dello Stelvio and Monte Zoncolan, the summit is the meeting point of three distinct routes; from Grosio  (14.8kms at 8.3%), Edolo (17.2kms at 6.7%) and, the climb that gives the pass its reputation, Mazzo di Valtellina, (12.5kms at a punishing 10.5%).

Probably the most defining moment in the climb’s short history was Marco Pantani’s first and only ascent in stage 15of the1994 Giro.  Having announced his intentions the day before with a spectacular victory in Merano, the longest and most mountainous day so far, the nimble cyclist sprinted away from his rivals (on the back of a 22-tooth sprocket no less), to  win the stage by almost three minutes. 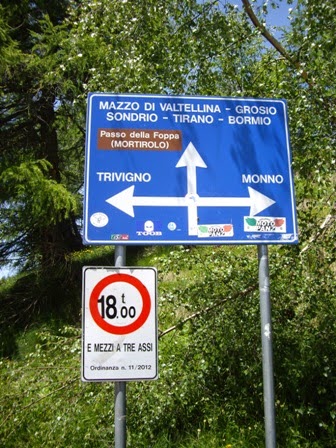 Whether it was a ride of sheer brilliance or one only made possible by doping, like Floyd Landis’s ‘cocktailed’comeback up the Col de Joux Plane in stage 17 of the 2006 Tour de France, you be the judge. But whatever the catalyst that enabled Marco Pantani to display his ‘dancing’ skills to the cycling world for the very first time, the striking monument honouring his exploits on that day, still stands on the right-hand wall on the side of the road, eight kilometres from Mortirolo’s summit.

If mental preparation is of some benefit, then you could say that the climb up Mortirolo is divided into three sections. The first three kilometres has an average gradient of 8.8% (which includes 500 metres at 11.6%), the final 3.5, a merciful 7.4%, while in between (from San Mate to the intersection with Grosio), lies 6 kilometres of ultra-steep road averaging an agonising 12.4%. Here, you’re virtually surrounded by thick forest on all sides, save for the narrow bitumen ‘escape’ route in front of you. Averaging between 11 and 18%, it’s not until you reach the top of this stairway that the views towards Valtellina, some 900 metres below, are unlocked.

With only the more moderate gradient to endure, you’re soon over the rise and heading past the sign that reads ‘Passo della Foppa’. Congratulations, you’ve made it to the top. Still not much wider than a goat track, Mortirolo’s 1,852 metres nevertheless feels less uncomfortable than the freezing temperatures of its snow-capped skyscrapers further north.

Despite its superior gradient and patriotic following along its steep slopes during the Giro d’ Italia, Mortirolo doesn’t otherwise appear to command the same popularity as either Gavia or Stelvio. Nevertheless, its sense of solitude and natural beauty leaves you with the distinct feeling that it’s a far purer climb than many of its commercial counterparts.

So if quiet surroundings, constant 10% gradients and never-ending hairpins (I believe 27) through almost unbroken forest are your bent, then Mortirolo is definitely the climb for you. Following the climb, if you need a bite to eat or you just feel like staying awhile to savour the views just below the summit, then a mere few hundred metres down the road, towards Eldolo, via Monno (on the SP81), is the Albergo Passo Mortirolo.

Who knows, you might feel like I did, enticed to do it all again over one, or even both, of the pass’s remaining routes.  An epic experience, climbs like Mortirolo are hard to find!
Books by Mark Krieger: