Hardly Too Soon, An Awesome Climb Makes Its Debut In The Tour de France: The Montée de Bisanne 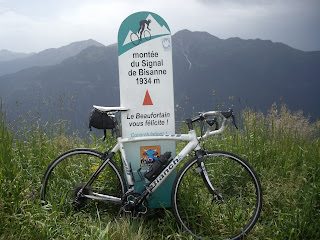 Tonight’s 146 kilometre stage fromAlbertville to Saint-Gervais Mont Blanc features Montée de Bisanne, the hardest of four tough climbs that will help determine the two remaining cyclists who’ll most likely accompany Chris Froome on this year’s podium.  Formerly known as the ‘’, it will make its very first appearance in toSignal de Bisannenight’s stage 19 race. And it’s about time too! Probably the most underrated French climb I’ve ever experienced, I can’t wait to watch the race leaders test each others’ nerve on the way to the summit. 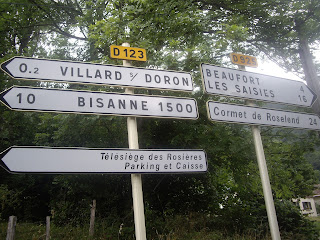 Here’s the extract from my book, ‘Lycra, Lattes and the Long Way Round’, which describes my climb, and my experience of watching the French Tour start up the Col des Saisies back in 2009. The 170 kilometre Stage 17 race, from Bourg-Saint-Maurice to Le GrandBornand, was eventually won by Luxembourg cyclist Frank Schleck, while Alberto Contador was the eventual winner in Paris, five days later.

Approximately 1.5 kilometres west along the D925 from the bottom of the Col des Saisies is the small village of Villard-sur-Doron. That’s where you’ll find the start of what is sometimes referred to as a mythical climb up the Signal de Bisanne, 14.4 kilometres of long, winding, supposedly undiscovered road. In a box full of colourfully wrapped mouth-watering chocolates, it’s the odd one out, sitting there unopened and all alone. 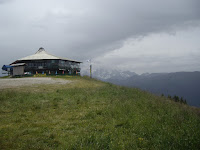 Climbing up that steep, narrow road early next morning, the occasional glimpses through the dense forest revealed a sheer vertical drop to the valley below. As I’ve steadfastly maintained, the big climbs become increasingly harder the higher you get, and the Signal de Bisanne was no exception. Joining the Saisies almost at the very top, the final 5 kilometres averaged a near 10% gradient. But the 360-degree panoramic view, dominated by Mont Blanc to the northeast, was a sight to behold. While having precious little time to smell the roses on this remote summit, the fact that this isn’t a commercial climb wasn’t lost on me. It was the perfect finish to what had become an insatiable appetite for chasing European mountains. 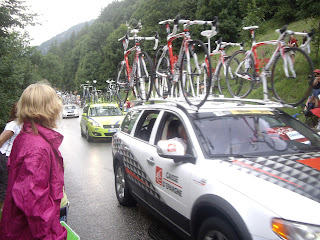 Running short of time, I began heading down the mountain the same way I came up. By now the fickle weather had closed in and rain was bucketing down. It reminded me of my descent from the Col du Granier down into Chambéry, though at least this time I knew where I was heading: the very bottom of the Col des Saisies, to watch the Tour come through.

Standing a few metres from the 90-degree bend in the road was Roz, wearing her by now well worn-in pink rain jacket and brandishing an enormous green hand the size of a wicket keeper’s glove. She’d obviously got into the carnival atmosphere that preceded the passing of the Tour entourage, followed by the even more fleeting appearance of the riders themselves. 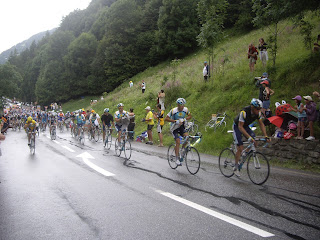 The hubbub and sense of expectation during the long wait was probably more exciting than the eventual arrival of the peloton, as the leading riders began making their way up the 15-kilometre climb to the top of the Col des Saisies. They moved so fast it was difficult to get more than a glimpse, especially from my interrupted view behind Roz’s incessantly waving cricket glove.

Probably no more than five minutes between the first few riders and the last, the peloton’s arrival and departure were history in the blink of an eye. Then, just as people were about to move, a voice behind bellowed for everyone to stay exactly where they were. Another five minutes of anticipation was followed by the appearance around the bend of just one remaining rider. Being the last, he received just about as much applause as the rest of the peloton put together. He looked to be going quickly, as fast as anyone ahead of him—and that, of course, was everybody. 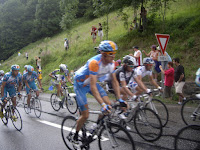 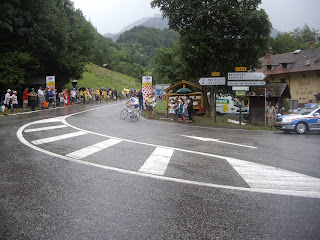 Maybe he’d had bike trouble or had just stayed too long in Beaufort for a beer and pizza. Whatever the reason, he wore a wry smile as the oncoming crowd began cheering him up the col.

Lycra, Lattes and the Long Way Round

*** Worth Noting: The actual ride up the Signal de Bisanne is two kilometres longer than this year's Tour's climb, which continued onto to the summit of the Col des Saisies. Like many of the toughest climbs, the approach to the top is the most punishing of all. The Bisanne's above-10% average gradient from now on, is an absolute must. Just keep following the road up to its quiet summit. Given the magnificent view of Mont Blanc, if the sun permits, you won't be disappointed.