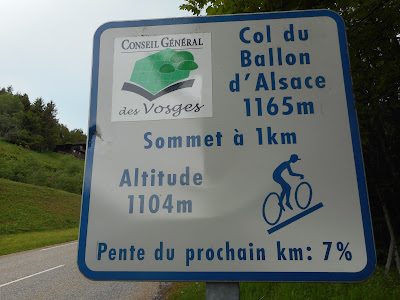 The distance between Morez and our overnight stay in the small town of Pont-de-Roide was 150 kilometres. To the northeast of Morez is the Doubs River Valley. Travelling along the D437, it’s the kind of ride where you roll over one gentle rise after another; each one flaunting a brand new view of green rolling hills and puffy white clouds.

The next day, another long ride between Pont-de-Roide and the hamlet of Urbes, was just as scenic but far more demanding. It involved crossing the Ballon d’Alsace, which was one of the many climbs I planned to ride long before we left Australia.

Steeped in Tour de France history, the Ballon d’Alsace made its first appearance in the Stage 2 race of 1905, from Nancy to Dijon. It is still claimed today, in the Tour’s official history, that the Col was the race’s first mountain crossing. Yet ironically, the French Tour ascended the slightly shorter and less-steep Col de la République in the two years prior: 1903 and 1904. 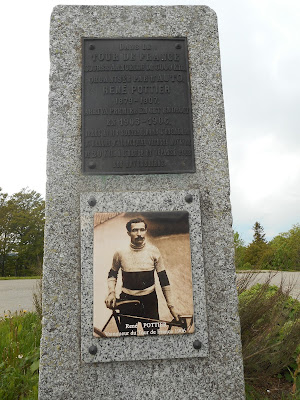 Disregarded as a serious-enough climb to challenge riders, Henry Desgrange (the first organiser and ‘father’ of the Tour de France) replaced the Col de la République with the Ballon d’Alsace. The first to cross its summit was Frenchman René Pottier, who, as luck would have it, withdrew from the race the next day after succumbing to an earlier injury.

In the following year (1906), Pottier returned to the Ballon d’Alsace and crossed the summit more than four minutes ahead of his rivals. Maintaining his lead all the way to the stage-finish in Dijon, he went on to be the first rider into Paris three weeks later.

As a tribute, a monument to René Pottier was erected at the summit of the Ballon d’Alsace. Sadly, he was found hanged – through suicide – at his home, in January the following year.

Although not used as frequently these days, the Ballon d’Alsace has made 20 appearances in the Tour de France over its more-than-100-year history. It was used every year until the beginning of World War I, while its last appearance was in 2005, commemorating the 100th anniversary of its first crossing.

Of the three roads up the Ballon d’ Alsace, the French Tour’s preferred route has been from Saint Maurice sur Moselle, to Malvaux. But less than 1200 metres high and with not much more than a 600-metre gain in height, one climb is not much more difficult than the other two.

Climbing the Ballon d’Alsace from each of its three sides is nowhere near as difficult as the three roads up Mont Ventoux – or harder still – Monte Zoncolan, but its gradient at least allows you to enjoy the scenery along the way.

The 9-kilometre climb from Saint Maurice sur Moselle is the steepest (6.9%), but the route from Sewen is not to be taken for granted. The first two of its 13 kilometres (only 0.6%) suggest the gradient is more-gentle than what it really is. Should you the Ballon d’ Alsace from Sewen, the 2 kilometres, half-way up the pass, is at a near-9% gradient. Meanwhile, if you prefer a less-travelled road you won’t be disappointed.