If you haven't the opportunity to venture to France's Mediterranean coast to climb mountains like Mont Faron, then perhaps visit Arthurs Seat instead. Rather surprisingly, there are a number of similarities between the two.

‘The Mont Faron is to people of the Var what the Eiffel Tower is to the Parisians. Just as the Parisians wake up and see the Tower... for people like me who have spent their life in the Var, the Faron is something you grow up with, something you carry with you for the rest of your life. For a cyclist, it’s more than that: it’s an honour, a rite of passage in a career.’

I recently read this passage from the book Mountain High (written by Daniel Friebe and Pete Goding). They were the words of race organizer and former Tour de France champion (in 1966), Lucien Aimar. While I can’t say I grew up with Arthurs Seat in my shadow – I was into my early fifties before I climbed it (by bicycle) for the first time – I feel like I’ve made it my own for more than a decade. Having climbed its short but steep, sinuous road more than 4 000 times (since I began counting), it has become almost as routine as breakfast.

When I climbed Mont Faron (from Toulon), back in 2009, it reminded me of Arthurs Seat. Only 200 metres higher, 2.5 kilometres further and less than 1% steeper, it didn’t take too long to reach the summit. But it felt excruciatingly tough, for almost every minute of the climb.
While the small seaside towns of Dromana, McCrea and Rosebud (which straddle Port Phillip Bay), are no match in size when you compare them with the large port city of Toulon, the panoramic views below, while descending, are hard to separate. Meanwhile, both boast more than a lacet-strewn road with a magnificent vista from the summit. 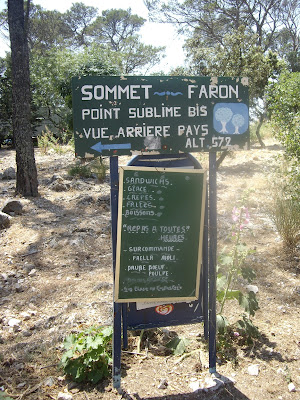 Mont Faron’s crest is home to a zoo, which can be reached by cable car, should visitors prefer not to drive, walk, or cycle. Likewise, Arthurs Seat State Park has its own cable car (again) these days – its 24 gondolas were manufactured in Switzerland – and two cafe-restaurants and a botanical garden at is summit.

According to Friebe and Goding’s book, Toulon’s bay is regarded by the local tourist board as the most beautiful in all of Europe – ‘and the third most beautiful in the world behind Rio and Hong Kong.’ While the views out to Port Phillip Bay aren’t from as high a podium, it doesn’t stop the hundreds of visitors – local, interstate and overseas – who venture up to its lookouts each day.


And don’t forget, cyclists as well!


“Life is like riding a bicycle. In order to keep your balance, you must keep moving.”
Albert Einstein
Posted by markkrieger at 01:10