Lycra, Lattes and the Long Way Round: Bordeaux, France 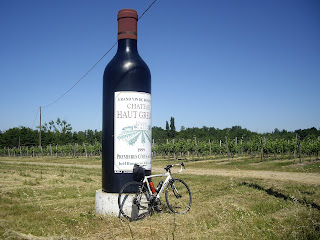 Seated between a multitude of tweets anticipating the remaining few days of this year’s Tour de France, was a tweet on the Bordeaux wine region; https://twitter.com/BordeauxWinesUK/status/887215867293048832

The following extract is from my first book (published in 2011), Lycra, Lattes and the Long way Round.

...I was looking forward to riding through wine country, the city of Bordeaux being less than 140 kilometres to the south. Along with Burgundy, it is France’s most important winemaking region, producing on average over 700 million bottles of wine each year.

I got off to an early start, a little before 9.00 am, managing to get onto a quiet rural road more quickly than anticipated. The map provided by the local Office du Tourisme was like following a recipe for boiling an egg. It was so easy. Most of the roads ran fairly parallel with the main motorways, the A10 and the D137, so there wasn’t too much meandering away from my direction of due south. I even began seeing signs to Bayonne, and my thoughts temporarily turned to the Spanish border and the challenging mountains beyond.


The abundance of vineyards and accompanying signs were also a constant reminder that I was now in the midst of the famous Bordeaux wine region. A giant red wine bottle, the height of an Aussie Rules goalpost, was also a dead giveaway. Breathing barely any noxious car fumes the whole day, I thought to myself, How could my current cycling life get any better than this?

It was then that I reached Bouliac. Until then, things were so good it didn’t even register that Bouliac ended with the letters “ac”. If I’d noticed I would have given it a wide berth.

I didn’t pay much attention to it at the time, but Bordeaux happens to be an important road and motorway junction. It’s connected to Paris via the A10 motorway, to Lyon by the A89, to Toulouse by the A62 and to Spain along the A63. What’s more, it’s absolutely surrounded by a ring road called a rocade, which for a cyclist forms a virtually impenetrable barrier. Like Rouen, if you’re attacking it from the east, as I was, you’ve got to negotiate a rather broad river, the Garonne. All very easy if you are a local in a car, but for an out-of-towner on a vélo, it was damn nigh impossible.
It was around 5.00 pm when I reached the outskirts of Bordeaux. As the crow flies, our night’s accommodation in Bordeaux-Sud was a little more than a paltry 5 kilometres away. All I needed to do was find a way to get over a main road, then the river, then the rocade, then a train line, before crossing the rocade again. It even looked unlikely on my map.

One hundred and twenty long and frustrating minutes later, after continually passing signs that read “Floirac”, “Latresne”, “Cénac” and “Tresses”, I ended up back at, you guessed it, Bouliac. Even a girl at a bus stop who I sought directions from didn’t have a clue. God, how I hated Bouliac.

It was a stifling hot afternoon, and the only thing I needed more than eagle’s wings was a cool drink. My water bottles were as exhausted as I was. After passing the same fruit shop for the third time, I finally had to get off my bike and fill up my bottles. Surely, I thought, someone in the shop will be able to help me find my way. 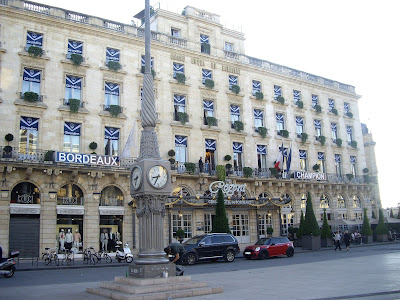 As far as a drink was concerned, the best I could do was get some warm freshly squeezed orange juice. Not exactly thirst quenching, but at least it was liquid. As for the directions, I could make no sense of the constant banter between the three over-enthusiastic locals in the shop. None of them being bike riders, they seemed to have no idea themselves.

Then in strode Benoit Huet—a sprightly gentleman in his late forties— and his son Nicolas, who’d come in to buy some strawberries. Being a cyclist, who had not yet found a cycling route across the river himself, he kindly offered to drive me, bike and all, to the motel where we were staying. He thought nothing of giving up his time to help me. “That’s the way in France,” he said, “particularly when it comes to people on vélos and being a cyclist myself.”
What a guy, I thought. What a guy. If only the ill-fated explorers Burke and Wills had have been met at Coopers Creek by someone like Benoit Huet, they would’ve survived.

It seemed Benoit drove around for hours. It was still the longest eight or so kilometres I’d ever travelled, even in a car. In better spirits, as we pulled into the hotel carpark, I felt slightly bemused at the thought of Benoit’s poor son, sitting in the passenger seat, steadfastly gripping the tray of strawberries the entire time.

Later in the evening, when I checked my odometer, it suggested that I’d spent more than 30 kilometres on the Bordeaux-East merry-go-round, which led nowhere but back to Bouliac. But I will never forget Bouliac, or Benoit for his kindness...

More photos from the book: 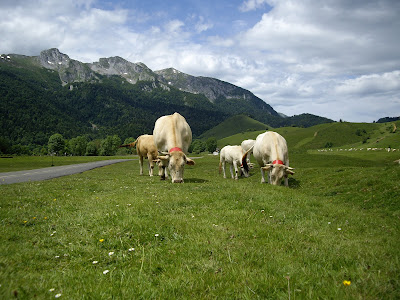 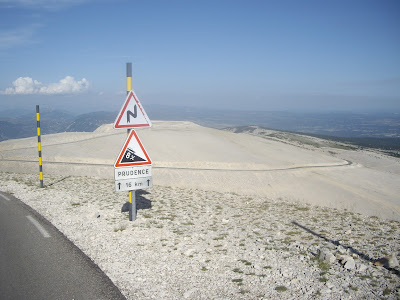 Where to purchase a copy of Lycra, Lattes and the Long Way Round...