Cycling in the French Alps: The Col d'Izoard 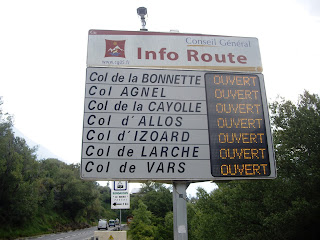 With Ventoux behind me, I was looking forward to continuing my journey through the Alps, and eventually back to the medieval town of Langres, where it all started. While long and challenging, the ride from the valley floor of Eygliers to the thriving city of Grenoble was probably the most satisfying of all the days I’d ridden so far. 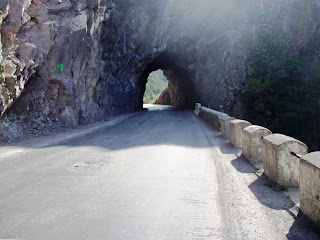 Heading off early, I was a lone figure along deserted mountain roads. The Information Route sign just out of Guillestre told me that there was literally a smorgasbord of climbing opportunities available. Travelling ever so gently along the D902, I began heading northeast through the strikingly beautiful narrow canyon known as the Combe du Queyras. Though cycling through mist and drizzle, the heaviness of the morning didn’t detract one iota from the stunning scenery along the fast-running Guil River below me. In fact, it was a welcome relief from the oppressive heat of the day before. 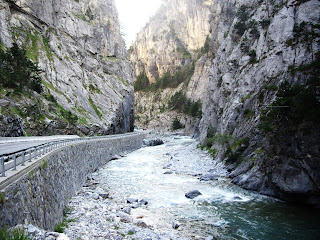 Riding along such a quiet and remote mountain route I had plenty of time to think. You can do that when you’re not trying to hold your nerve along busy roads or second-guessing the movements of erratic drivers. Here I was, virtually travelling in the shadows of Napoleon’s Alpine army. I was still in the Southern Alps, but a long way –  not just literally, but also metaphorically – from the Mediterranean coast. Gone were the black single-cylinder mopeds, the bumper-to-bumper traffic, the car horns and the unpredictable traffic lights that led to the even more unpredictable behaviour of motorists. And while travelling along remote Alpine roads, there wasn’t much chance of taking a wrong turn and getting lost. Quite unequivocally, give me the mountains any day.

Close to the Italian border, at the junction of the D902 and D947, was the turn-off to the Col d’Izoard (2,360 metres). Separating the Guil and Cerveyrette valleys, the remoteness and beauty of its route, amidst a stunning geological backdrop, is as scenic as it gets. Once at the turn-off, the gradient becomes more severe, along an almost constant straight line of more than 6 kilometres, until you reach the tiny village of Brunissard. From here the road winds steeply through the trees. Finally, as you get closer to the top, the surrounding landscape changes dramatically and you find yourself in the barren scree slopes of the Casse Déserte wilderness, which are often photographed to showcase the Tour de France.
Standing below the eroded cliffs of the Casse Déserte, about 2 kilometres from the summit, is the memorial to two of the great Tour riders: Frenchman Louison Bobet and the great Italian cyclist, Fausto Coppi. Dual winner of the Tour de France, in 1949 and 1952, Coppi also won the World Championship Road Race in 1953 and the Giro d’Italia on no less than five occasions. 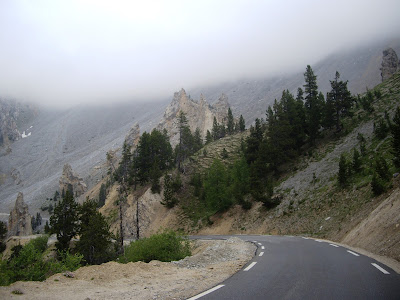 In the 1953 Tour, Bobet, on his way to gaining the yellow jersey, and the ultimate prize, took the lead at the foot of the unmade road up the Col d’Izoard and was almost nine minutes ahead of the pack by the time he reached the summit. Not competing in the race that year, Coppi stood underneath the Casse Déserte, at the site where the memorial now stands, watching Bobet’s famous breakaway. As Bobet rode in indomitable isolation past him and other spectators, the awestruck Italian was heard to say to French team manager, Marcel Bidot, “Beautiful, that was simply beautiful.” No fluke, and testament to his durability and determination, Bobet also went on to win the Tour de France the next two years, becoming the first- ever three-time winner of this great event. 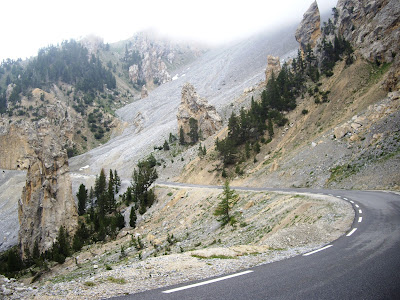 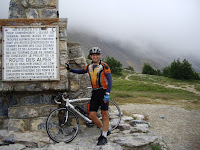 Riding in perfect isolation, though not nearly as perfect as Louison Bobet’s climb that day back in 1953, it didn’t take me much longer to reach the top. Hardly surprisingly, there were spectacular views from the summit down each side of the col – and there were many people sightseeing and taking photographs.

Lycra, Lattes and the Long Way Round
Books by Mark Krieger:

Email ThisBlogThis!Share to TwitterShare to FacebookShare to Pinterest
Location: Indonesia