Extracts from the Books 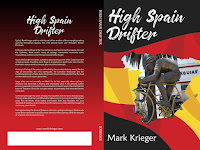 Chapter One: You Belter Espana


“Travelling – it leaves you speechless, then turns you into a storyteller”.

I happened upon the idea of cycling around Spain after reading a book called The Man Who Cycled the World. Written by a Scottish adventurer named Mark Beaumont, it described his whirlwind circumnavigation of the globe on a bicycle in 2008.

Now 60, I’d hardly compare myself to the Mark Beaumont I came to know from his book. For starters, he clearly knew how to put a bicycle back together. Luck and my good friend Lore’s mechanical expertise are the only insurances I have when it comes to the durability of my bike on long-distance journeys. Beaumont was also self-sufficient, carrying all of his provisions with him, and travelled quickly enough to smash the previous record for the fastest cyclist to make it around the world – by more than 80 days. He took just 175 days.

But it wasn’t the time he took to complete his journey of nearly 30,000 kilometres that impressed me the most. It was more the places he visited along the way and the experiences that came with them; sometimes daunting, sometimes curious, and sometimes moving, but in all cases unforgettable.

Our ideas and inspiration often come from the most surprising events, not least learning about other people’s experiences and adventures. So, inspired by Beaumont’s book and buoyed by a recent cycling journey around France, I couldn’t wait to compare paella with quiche and barra with baguettes, not to mention how Spanish and Portuguese sangria matches up against a full-bodied French red wine. Most of all, I wanted to compare the lush French Pyrenean mountains and valleys with their dryer Spanish counterparts. And not least, there was a rather difficult mountain to the west, near Oviedo, that was beckoning for a third time.

Virtually from the moment it was introduced to the Vuelta in 1999, Alto del Angliru, in the heart of the Asturias, became Spain’s mythical equivalent of France’s Mont Ventoux and Italy’s Mortirolo. It is 12.5 kilometres in length and has an average gradient of above 10%. While a formidable enough challenge itself, it’s the climb’s last 5 kilometres, which include lengthy stretches of grades above 21% and 23%, that make it so tough. Unequivocally, it’s the hardest mountain road I’ve ever climbed – and in all likelihood, it’s the hardest I ever will.

If you’re game enough to try it, chances are that when you exhaustedly roll over its barren summit, there’ll be nothing to greet you save the shivering cold, the incessant mist and the clanking of cow bells. Your only reward might be the satisfaction of having cycled up a mountain that is so damn difficult.

My first time ever across a border into Spain was at the wheel of a sleek grey French Peugeot, albeit a rented one. My wife Roz and I were travelling, rather cautiously, along the A63 from Bayonne towards the pretty coastal town of Ribadesella. We were visiting Spain for a week. The aims were to give us both a break from my riding, to climb a few mountains together and to give Roz a first-hand glimpse of Segovia’s famous aqueduct, built skilfully by the Romans during the 1st century AD.

While having seen and learned almost as much about France as about my own country, not to mention a fervent interest in French history that had begun long before my first turn of a pedal in Europe, I was something of an inexpert when it came to its Pyrenean neighbour. For me, even a Grand Cycling Tour like the Vuelta a España seemed to pale into insignificance compared to its charismatic rival, the Tour de France. I guess it still does! Then again, doesn’t every other bicycle race?

Other than the captivating beauty of Penelope Cruz, a very lifeless Charlton Heston on the back of a horse in the movie El Cid, a few Year 8 student projects on Isabella of Spain, and above all, George Orwell’s fascinating novel Homage to Catalonia, I was pretty hopeless when it came to recalling information on Spanish history, politics, culture ... and even cycling.

Chapter One: I Have a Pimple

Not 12 kilometres from where I live, there’s a “pimple” called Arthurs Seat.  On the C789 road, it’s a 305-metre mountain which rises abruptly from Port Phillip Bay in Victoria, just outside the quiet bayside suburb of Dromana.

It’s obviously not that tall as mountains go, but if you were a local and a cycling masochist, like me, chances are it would just about be your favourite spot.

Arthurs Seat was named after its Scottish namesake in Edinburgh, by an English Lieutenant, John Murray, during the first exploration of Port Phillip Bay, in 1802.  Despite its rather unimpressive height, it’s probably the most familiar of all Port Phillip Bay’s landmarks.

On weekends and over summer especially, tourists come in droves to walk, picnic, drink, get married or just take in the spectacular view of the Bay and Port Phillip Heads.

But cycling nuts prefer the mountain all to themselves and there’s no better time than a weekday in winter, or better still autumn and spring, to simply get on your bike and head up the hill.

Now it’s starting to sound like I’m beating my chest, just a tad, about a piddly little bump on the horizon.  After all, Australia itself is hardly recognised for its massive peaks.  Indeed, Mount Kosciusko, the country’s highest mountain at 2,228 metres, is over seven times the height of Arthurs Seat, while the Cime de la Bonette in the French Alps, at 2,802 metres and supposedly the highest paved through road in Europe, is more than nine times its height.

At first glance it’s like comparing the size of a golf ball with that of a basketball.

But despite its meagre 3.03 kilometres, this granite hill is remarkably steep.  For half its length it has a gradient of 9.5% or more, with an average of 8.1%.  That makes it steeper than France’s Col du Tourmalet, Hautacam and Italy’s Passo dello Stelvio.

Now, Arthurs Seat might be a pimple but you’d hardly call it ugly.  To start with, it has many moods due to its position on the coast and Melbourne’s ever-changing weather.  You can be dry at 100 metres, yet at 80 metres from the top you’re riding through drizzle or mist.  On sunny days you have the most beautiful views of the Bay below.

Some things change, like the mood of the sea, but some things never do, such as the McCrae Lighthouse, Rosebud Pier, the town of Dromana and the Spirit Of Tasmania ferry which tirelessly ploughs its way back and forth across Bass Strait.

Arthurs Seat has a few other local masochists who you have a good chance of meeting on your way up or down the hill.  That’s one of the attractions, stumbling across people like yourself who love the freedom of riding a bike.

My mate Trev is one such character, who climbs Arthurs at least two or three times a week.  Riding up together one Saturday morning I remember him saying, “I’ve never been so shithouse at something I enjoy so much.”  To me, that perfectly encapsulates how easy and enticing it is to ride a bike up a hill.  All you need is a pair of legs, a bike with the appropriate gear ratio and most importantly, the willpower to do it.  Trev isn’t quick, but he loves it.

As a schoolteacher, I always begin the year by reading excerpts to my students of Lance Armstrong’s book It’s Not About the Bike.  His words are full of hope, passion and resolve, which I figure will at least inspire some students to think about what’s important to them in life and the perseverance required to achieve what they want.

As for the others, well you can at least say to them: “Stop the whinging about the work you have to do.  Be thankful you’re not riding a bike up Mont Ventoux!”